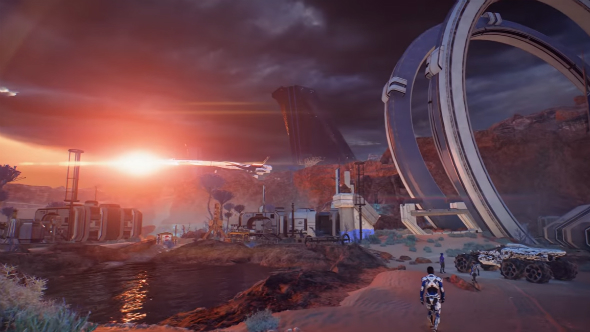 Update March 20, 2017: With your trial period used up, here’s when you can actually play the full game.

Assuming you blew through the 10 hour preview of Mass Effect: Andromeda at the weekend, here’s the release times for the final version.

Here’s our Andromeda romance guide and character guide to keep you occupied until Tuesday.

There are two release dates for Mass Effect: Andromeda. More on that particular wrinkle down below, but the first applies to Canada, Latin America (except Brazil), Mexico, Russia, South East Asia and the USA. It will go live at:

The second release date is for Africa, Australia, Brazil, Europe, Israel, Middle East and New Zealand. It will go live at:

Also of note is that some of these regions may just go live at midnight local instead of based on one timezone in their group. Head to Origin and go to the Mass Effect: Andromeda page and it will tell you in the top right your unlock time.

Those of you railing against the injustice of digital oceans might be interested to know that it’s possible to use a VPN to authorize your installation during the US release period, with a Korean server providing the earliest possible access. This has worked in the past for various other Origin releases.

If you’d rather avoid Origin, you can pick the game up on Amazon UK or Amazon US.

Update:It turns out the times we reported below were bang on and the trial is available to download now.

The only thing standing between you and ten hours of Mass Effect: Andromeda is an Origin Access subscription, which is already amazing value without the trial. 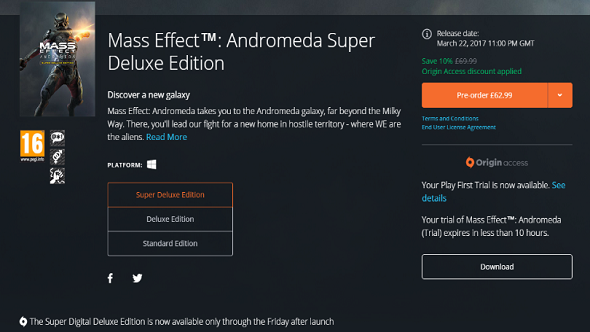 Original:Mass Effect: Andromeda’s Origin Access trial is almost upon us. While the official line said the trial would begin tomorrow, March 16, it’s looking likely that it’s actually going to kick off today.

Some people have managed to grab the trial, and the page there says it will be available today, March 15. Here’s a screen.

Assuming that’s all correct, that means you’ll be able to play the ten hour trial at the following times:

We asked EA for comment yesterday, but they weren’t sure of exact times at that point. As to not leave players disappointed, this is all EA would say on record: “Early Access will be available for everyone starting Thursday.”

Judging by the various screens from Origin floating around the net – particularly on this Reddit thread – it’s all settled now, though.

Battlefield 1’s trial also kicked off early, so there’s precedent for this. It’s worth noting that it may not be a global launch, however, and times may stagger, but that’s unlikely.