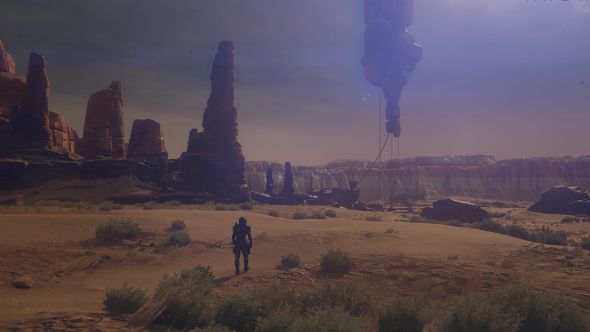 As part of yesterday’s N7 Day festivities, BioWare unveiled a new preview programme called BioWare Beacon, kicking it off with early access to Mass Effect: Andromeda’s multiplayer mode. But not for us.

For all the latest on Mass Effect: Andromeda, here’s everything we know about the game.

If you also dip a fleeting toe into the console world, you can sign up to BioWare Beacon hereand enjoy some cooperative (or possibly competitive, depending on how much has changed) Mass Effect.

One of the places Beacon was announced was on BioWare producer Fernando Melo’s Twitter account. It was here that a follower raised concerns about the lack of a PC version (many thanks, Aumkar Prajapati). Melo replied that this was “all to do with how much earlier we must submit the final game on [console]”, and not necessarily a reflection of the stability of the PC build.

@aumkar_p All to do with how much earlier we must submit final game on those platforms. But if concerned, def recommend waiting for reviews.

All console holders have a rigorous certification process to ensure that all games which wind up on their platform meet certain quality standards (for some fun* games industry history about why this is necessary, read up on the 1983 industry crash). This is a common reason why console versions of a multi-format game are often more polished than the PC version in the lead-up to release.

It’s a shame we can’t get in to sample Andromeda’s multiplayer. In Mass Effect 3, it was a team horde mode which felt like something of an afterthought. Here, lead designer Ian Frazier assures us it is “kinetic, smooth, and incredibly fun” and that the team “have done amazing things”, so it’s clearly had some development. But at least we have an assurance that PC’s lack of access isn’t to do with technical issues.

Mass Effect: Andromeda is still, officially, on track to release in spring next year.