Piranha are working to solve some of the problems prevalent to Mechwarrior Online. They’re starting with matchmaking. They want you to be able to drop into a game and find your place among other pilots in a well-balanced lance of mechs, instead of the current, seemingly random grouping that can see you and three other light mechs against heavies and assaults.

“Our Vision for Player Experience,” write Piranha, “[is for players to] drop into a match and play against a team of reasonably equal skilled players and equally balanced lance builds. The ideal lance build would consist of 1 Assault, 1 Heavy, 1 Medium and 1 Light ‘Mech to bring the full breadth of play types to the battlefield.

“We do understand that this isn’t the best lance build within a company since you’d probably want to have your scout lance, skirmish lance, support lance and assault lance. This 1/1/1/1 build however would bring lances together that made a company build a lot more strategically balanced.”

There’s more to it than that. Players who are alongside their friends will likely do better than solo players who won’t communicate as freely, so “ teams should not be mixed with multiple groups on 1 team and solo players on the other. An equal balance must be maintained due to the groups having much more communication and can affect how a team performs.”

So that’s the grand plan. They’re on their way to it, too. They’ve found ways to balance the builds on each team. “Instead of restricting team builds by tonnage … we decided to implement a team building limitation based on Weight Class. This means for each ‘Mech of a certain Weight Class, there is one on the opposing team. On top of that, we will enforce a 3/3/3/3 team build based on Weight Class as well. That is, a team is to consist of 3 Lights, 3 Mediums, 3 Heavies and 3 Assaults. No more, no less in each class.

With this solution, players are able to launch in any Mech they own without having to worry about a tonnage limit restricting their ability to do so.”

In short, this is what the process for a single player launching the game looks like: 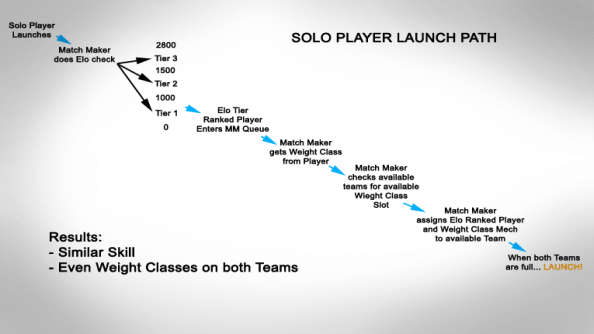 There’s a lot more to the new matchmaking system which is why Piranha don’t expect to see it released till 29 April. Read more about the changes on the Mechwarrior forums.