Piranha Games, the studio behind MechWarrior Online, has been oddly quiet over the last few months. Since the studio split from its publisher Infinite Games Publishing and went independant, it has been silently working away on some pretty major features. Radio silence ends today, though: Phase II of Community Warfare, MechWarrior Online’s large-scale faction mode, launches right now. Not only that, but a brand new MechLab is now available, and it’s better than ever.

“Anyone who knows anything about MechWarrior knows that the MechLab is one of the most identifiable features. Not only to MechWarrior, but to all games of all time,” explains Russ Bullock, president at Piranha. The MechLab is a garage that allows you to customise your mechs in any which-way fashion you want. It has been in the game since day one, but today sees a brand new, heavily improved version open for business.

“It’s the most customisable thing of any game, I would suggest. We listened to the players for the last year to design the perfect MechLab. It’s a much cleaner, sophisticated, intelligent MechLab. It reduces the amount of clicks and screens and gives you a lot more control, power, and information at your fingertips,” says Bullock.

The MechLab is the concluding element to six months of silent development on MechWarrior Online. Whilst the studio hasn’t been making many announcements, the game has been quietly growing since December. Additions players have picked up recently include VoIP support, Looking for Group features, Global Faction Chat, a new Queue Information screen at game lobbies, and Call to Arms; a system that shouts out to players when their factions are fighting and where there are games they can get involved in. 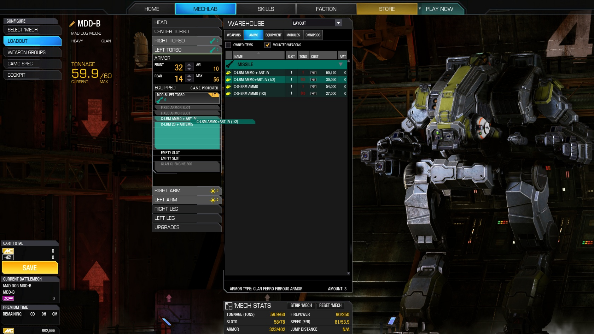 This all makes up Phase II of Community Warfare, which is MechWarrior Online’s massive player-led campaign. Every player belongs to a faction, and each game is a battle over territory on the InnerSphere map. But with Phase II now in full swing, Piranha are looking ever forward to Phase III.

“We’re already working on Community Warfare Phase III,” says Bullock. “There will be a whole new 4v4 scouting mode added to Community Warfare. We’ll be emphasising the difference between faction loyalists and mercenaries so they have different roles for players. Right now everyone feels like a mercenary, there’s not enough separation.”

Alongside working on improvements to the core of the game, Piranha are focusing on MechWarrior’s sporting capabilities. “Right now we have a big effort underway to improve our spectate and tournament tools,” explains Bullock. “Tools for spectators will be much improved so they can live stream and broadcast. We’re just a few short months away from having those improvements live.” With these tools in place, Piranha plan to host some official MechWarrior tournaments.

As an ever evolving service-based game though, a few short months into the future isn’t planning ahead enough. There always needs to be more down the road. And sure enough, Piranha have big plans. “If we’re looking just a little further ahead, it’s PvE,” teases Bullock. “This is MechWarrior. People have so many fond memories of singleplayer content, and we’re gonna get there. We’ve been building up such a massive amount of content and we’ve got great mech models that would certainly be perfect for PvE content. Great levels of texture content, great battle systems, and all of it’s done. There’s some big holes there, artificial intelligence of course, but there’s no question that we’re gonna get there. We know players want it.”