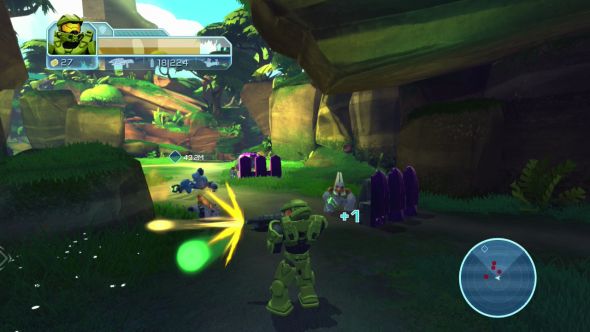 ﻿Update January 10, 2017: the founder and head of Halo studio 343 Industries has commented on the Mega Bloks footage.

﻿Yesterday (see below), we reported on some interesting footage recently uploaded by a YouTuber. It showed a family-friendly Halo game developed alongside Mega Bloks, the Canadian Lego competitor. Now the boss of 343 Industries has said she wants to hear your thoughts on what you saw. (It turns out the game was codenamed ‘Haggar’, by the way.)

Here are a few other cancelled videogames – all sequels – that time forgot.

Bonnie Ross tweeted that 343 would be happy to hear your thoughts on Haggar:

The link in Ross’s tweet goes here, a post on Halo waypoint with some more details and a comments section, where you should leave your thoughts.

“Haggar was something we prototyped with our friends at Mega Bloks that focused on the elements of action, exploration and user creativity found within the Halo universe,” says Ross. “Haggar had a lot of fun ideas and invention behind it, but ultimately didn’t progress beyond the early prototyping levels”.

The comments are overwhelmingly positive, so perhaps we can hope that Microsoft and 343 will un-cancel the project. If you’re going to add your voice, be sure to ask that the game comes to PC! I mean, it probably will because of the universal Windows thing, but still.

Original story January 9, 2017:Footage has recently surfaced on YouTube of a family-friendly Halo game developed in partnership with Mega Bloks, Canada’s answer to Lego. The game was cancelled in 2013.

The video shows nearly twelve minutes of gameplay and comes courtesy of YouTuber PtoPOnline. From the looks, it seems the project wasfairly far along in development.

Mega Bloks don’t feature as prominently in the aesthetic as Lego pieces do in Lego games. Master Chief is a bit squatter, but the environment he explores is mostly organic with a friendly, Blizzard-esque sheen. It reminds me a lot of World of Warcraft. Mega Bloks are used only for artificial objects, like barracks and landing pads.

Perhaps blocks are in short supply because they are also a resource for the player. Master Chief is shown building gun turrets and vehicles from his cache of blocks, as well as structures; walls provide cover, while elevators are sometimes necessary to make progress. There’s plenty of shooting, some boss fights, some platforming sections and some environmental puzzle-solving.

Honestly it doesn’t look too bad. Shame it was cancelled, but apparently it would’ve been an Xbox 360 exclusive, so it wouldn’t have launched on PC anyway.

Mega Bloks Halo – not its official title, but it’s what we’re calling it – was being made by n-Space, who sadly shut down in March 2016. The cancellation of a project so far in development will doubtless have badly hurt the studio, and indeed one commenter on the video claims he had a friend who was laid off as a result of Mega Bloks Halo getting canned.