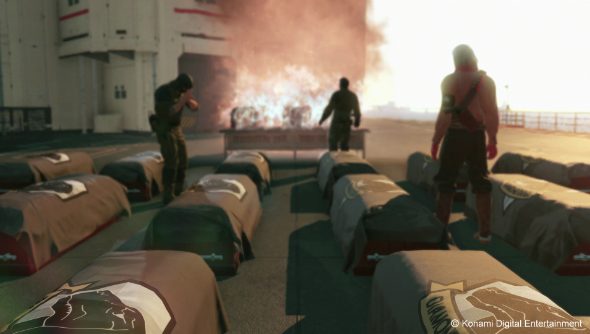 NB: This is not our review of Metal Gear Solid 5 on PC. This is an impressions piece based on 32 hours spent playing the game on PS4. We are still awaiting final PC code – once we receive it we will have a full review up as soon as we feel we’ve had enough time with the game.

Words are strange, powerful things. They’re currently bouncing around my brain, through my hands and onto my keyboard. Your eyes are now scanning my thoughts and your mind is processing them, trying to resist the urge to write an insult-laden reply in the comments. It’s like rubbish telepathy.

The existence of words, of language, has changed our species. Indeed, learning a new language even alters the physical structure of your brain, and some studies show evidence that your native language may even change the way you see the world.

How language – or its absence – can affect us is just one theme Hideo Kojima explores with Metal Gear Solid V: The Phantom Pain. It also attempts to tackle genocide, post traumatic stress, child soldiers, and coping with physical and emotional loss, all to varying degrees of success. Sitting alongside this hard hitting drama is a seemingly indestructible man who’s perpetually on fire, a girl who floats around in a gas mask, and an almost naked woman sniper called Quiet who has an unlockable costume that sees her covered in gore.

The more fantastical (and often stupid) elements of the game can be a bit jarring against the more serious subject matter, but its tale is delivered in manageable chunks. Surprisingly for a story about language – especially so considering the casting coup of Kiefer Sutherland as Big Boss – dialogue is more sparse than you would expect. Kojima has been known to indulge himself, letting the snake eat its own tail (sometimes disappearing up its own arse), but MGSV is more concerned with letting you enjoy its open world than forcing you to listen to someone’s political musings on the military-industrial complex – much of that is on optional audio recordings that can be listened to on the move. 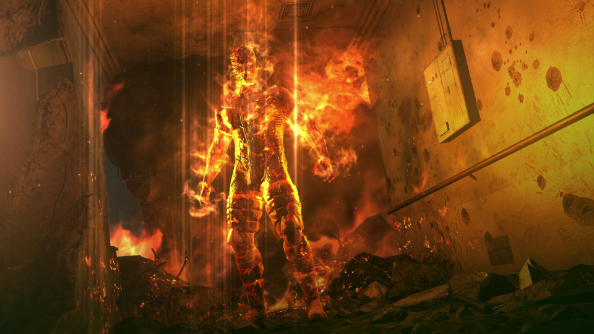 At its core, this is a simple tale of revenge, and though there is plenty here for people who love the mythos, it’s much easier for people not invested in the story to digest. MGSV picks up almost a decade after Ground Zeroes, with Big Boss awaking from a coma in the ‘80s, into a changed world that thinks he’s dead. From here his motivations are clear: rebuild his legacy and get revenge on those responsible for the destruction of his former base. The game’s opening isn’t the best showcase of what’s in store – it’s heavy on exposition, asks you to follow a computer controlled partner and restricts your movement – but once you arrive in the sandy plains of Afghanistan it’ll vanish from memory like a desert mirage caught in the peripheral.

Every MGS game brings with it a new mechanic or twist, but inserting the series into an open-world is the biggest game changer yet. Previous games in the series – with their areas split into sections, their barriers dictated by loading screens – have sometimes felt like puzzles. You could still experiment and play with the guards, but at their heart they were about finding an unseen route through a predetermined area. In MGSV most of the areas have 360 degrees of possible entry points, changing guard patterns, different light and weather conditions and a huge array of gadgets to toy with. Put simply, you can play the same mission and have a different experience each time.

It is a game about creating your own emergent stories, not cartwheeling into a barrage of codec conversations. It’s still very much a MGS game, full of quirkiness – commanding your horse to defecate on roads so enemy vehicles lose control, riding down sand dunes in a cardboard box, or equipping your canine companion with a combat knife – but your options are far broader and the environments much more accommodating. The first map is Russian occupied Kabul, Afghanistan. Its landscape boasts variety in its dusty plains, sandy dunes, mountain vantage points and deep canyons – layered over all this are military bases, villages, research facilities, villas, checkpoints and more. 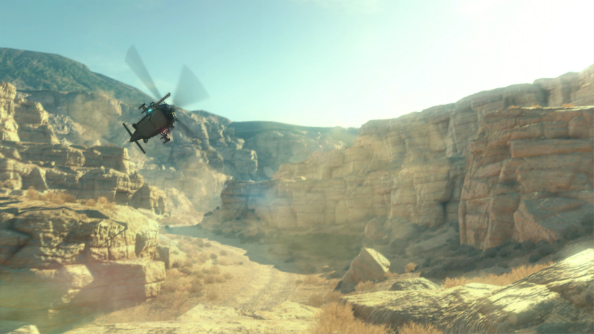 When on a mission you choose the drop zone, what equipment you’re taking in and what buddy, if any, is assisting. Choice of buddy alone can change the dynamic of a mission. You could take D-Horse for speed, D-Dog for melee support, Quiet for sniper cover, or D-Walker for versatility. Add your choice of equipment and the possibility of taking a vehicle on mission and there’s a lot of variables. All of these decisions can also be changed by calling in a care package from Mother Base, an ever expanding hub and your own personal offshore military base that grows depending on your orders. You choose which platforms get built and all the equipment and personnel is sourced on missions, kidnapped by your Fulton balloon – you attach it to shipping containers, vehicles, unconscious guards or animals and send them back to your base with a gut-wrenching jolt.

Mother Base is a joy to expand. You’ll find yourself visiting to check in on your staff between missions, perhaps giving them a swift backhand as you pass to boost their morale, or assigning them a different role. When you’re done wandering around your creation, you call in your helicopter to any of the landing pads and jump aboard, leaving your base behind with a lingering flyby. It all feeds into the feeling that Kojima wants us to tell our own stories. It feels personal. Once you’re dropped into a combat zone, even making your way to a mission can create some incredible anecdotes.

I was once riding my horse through Kabul when I spotted the headlights of an approaching jeep, so I jumped from the saddle and laid prone on the ground in my desert camouflage. There was a sheep in the road, so the driver stopped and was beeping his horn and shouting at the animal. Rather than wait, I crawled up a nearby mountain path. At the peak I found two snipers, each with a spotter. I creeped up behind them and snatched them by the throats, dragging them away and squeezing the consciousness out of them one by one. I got four talented new recruits for my base and saved myself some trouble en route to the mission, all while listening to Blondie. 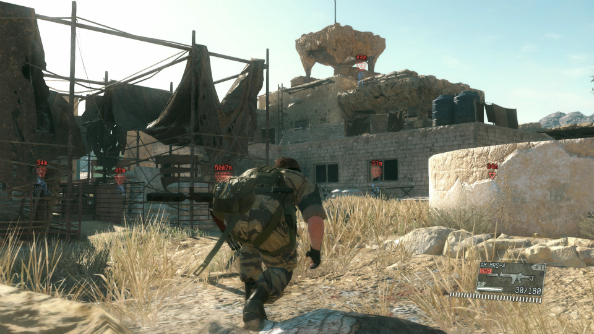 The stealth is the most satisfying and intuitive I’ve played, factoring in foliage, shadow, camouflage, line of sight, weather and noise. This combines with a responsive control system that allows you to dive onto your stomach and aim immediately wherever the camera is pointing, even if you’re prone, in which case you twist and roll to get into position – you can use a quick trigger finger to get out of a tight spot, as time slows momentarily when spotted. To top it off are convincing enemies who are just clever enough to surprise, but not so much you can’t predict them.

The checkpoint system discourages restarts by being spread out. This in itself can lead to creating drama with you owning your mistakes and battling to escape, perhaps accidentally destroying a radio tower and cutting off enemy communications in the process. Most of the time the choice to break the gameplay is entirely in your hands, with trips back Mother Base used to wind down after a tense operation.

This being the last MGS game from Kojima, it’s fitting that he would leave us with one where the most important story is the one we’re in control of. I have a really vivid memory of crossing a bridge in MGSV. I was just en route to a mission, but this sudden funneling of the map created a whole new obstacle and the way I overcame it was more entertaining than any set piece I’ve ever played in a game. I won’t tell you my solution because that experience will be completely different for you, but it will likely be just as special, just as all the other moment-to-moment choices will make your experience distinct. Now, which iconic ‘80s pop star will you kidnap sheep to?