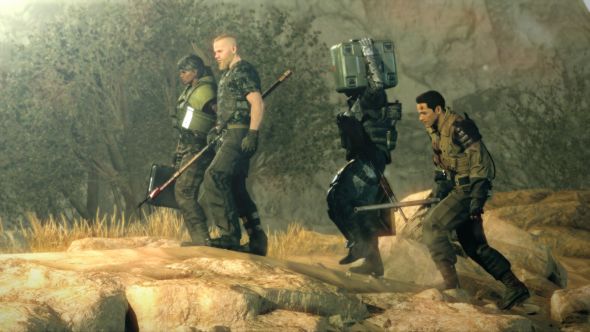 Where to take MGS now that Kojima has gone? Konami have decided the answer is zombies, wave defense and co-op in an extremely odd timeline. We’ve played it, and this is what it’s like…

The example we played was a four player co-op wave survival mission. We picked from two predefined characters but you’ll be able to customise in the final game. Each comes with an array of weaponry – assault rifles, pistols, bow, melee batons – and then traps and defences to lay down.

These include fences, flame traps, guard towers – the standard, but also stranger, Metal Gear familiar things like fulton balloons. These allow you to pull zombies into the air and suspend them for a short time, making them easy targets. There’s even a mortar. That’ll show those undead gits.

Before you begin, you have a moment to fiddle with your loadout and test out your kit. Rather than happening in a room off to the side, all the testing takes place in a white space area straight out of The Matrix’s loading screen.

Once it kicks off there are three stages of battle:

Get into the base. It’s not a long or difficult fight to get inside, with just a few enemies. This does give you an opportunity to check out the area and plan your mortar shots, of course. You’re then camped inside the ruined rubble of a building.

This is where you set up your traps and do further scouting of the area. There’s a crafting system found at a table at the base, so you can go around and grab resources – rubber from tyres, copper wiring, and so on.

Once you fire up the generator in the base – which is what you need to defend – a countdown timer begins for the first wave. Arrows on the floor show you what paths the zombies will take.

Then it all kicks off. There are three waves of increasing difficulty. Enemies stagger in from a way outside the base in different directions, meaning you’ve got plenty of time to prepare. The first wave is pretty easy, and they do get tougher, but we managed to take it down without too much of a sweat. Possibly because we’re amazing at games. 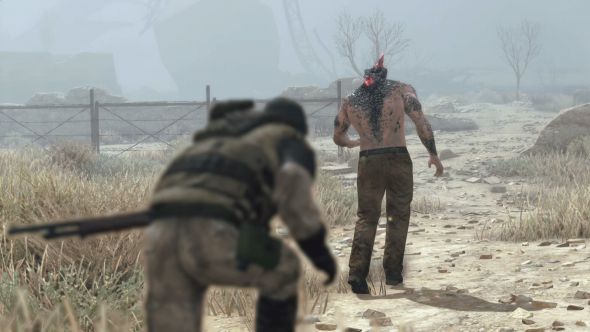 Enemies aren’t just standard shamblers – there were “bombers” that have huge, grossly inflated heads that explode. Obviously, some inspiration taken from Valve there.

Between rounds you can venture further outside on mini missions, letting you replenish ammo or get inside a Walker Gear. Unsurprisingly, those are incredibly useful – they’ve got miniguns and powerful kicking attacks. Squish.

The whole thing ties together quite nicely, and plays well, because it’s really built upon MGS V’s UI and gameplay. When firing those mortars, it’s exactly the same as it was in the last Metal Gear Solid.

After all that – it’s just, well, okay. It’s fun to shoot zombies, and it’s better in co-op (especially with friends: voice chat is on the way, and we’re awaiting an answer on cross-platform play), in case you missed that revelation a decade ago. Beyond those basics this is very brown and uninspiring to look at, with none of the flash that brought Left 4 Dead to the forefront of gaming schedules. Better than we’d feared, but perhaps not what a Kojima series deserves.