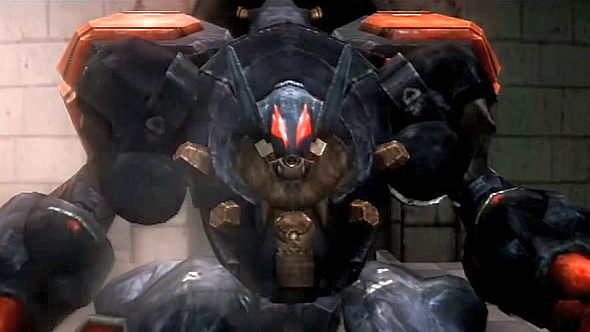 Devolver Digital has tweeted a steel-grey Presidental seal. If it were anyone else, that wouldn’t be headline news. But because it’s Devolver, it probably means we’re about to hear something to do with Metal Wolf Chaos.

The original Metal Wolf Chaos was a third-person shooter from no less a studio than FromSoftware, maker of Dark Souls. It was released exclusively for the first Xbox, and exclusively in Japan, in December 2004.

Its suitably bizarre premise: in the early 21st century, America has plunged into civil and economic unrest, and President Michael Wilson has taken matters into his own hands. Using a suit of powered armour named Metal Wolf, he fights to retake control of the country from those who have ousted him in a coup d’etat led by his own Vice President, Richard Hawk.

Which of these classic PC games need a random re-release?

Metal Wolf Chaos never saw a Western release, but gained a cult following thanks to a series of YouTube videos depicting its plot (it had full English voice acting). The Devolver connection comes after it expressed interest in the IP back in 2016, saying via Twitter “count us in to help Metal Wolf Chaos get out to more gamers if From Software wants some help.”

We haven’t heard much since then, until today’s out-of-the-blue tweet.

The obvious conclusion is that Devolver managed to get the rights or to broker a publishing deal with FromSoft, and are teeing up a Metal Wolf Chaos announcement at E3. More than that, we can’t say – the possibilities range from a re-release across modern platforms, through a remaster or remake, all the way up to a new game, whether sequel or reboot.

Any and all of those possibilities would be hugely exciting for Metal Gear Wolf’s cult following, and if you want to know why, check out the Let’s Play series by Two Best Friends which did so much to bring the game to Western attention back in 2012. As you can see, it’s extraordinary – you play a sitting US President who can shoot the statue of his own father with a suit of power armour, to then get berated by his ghost. That probably tells you all you need to know.