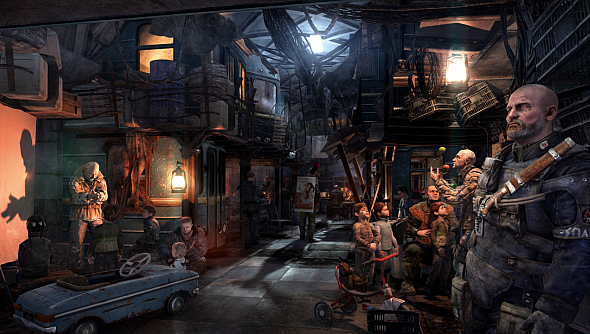 Life in Metro: Last Light is no roadside picnic. Its harsh setting acutely reflects a world gone to hell, with the remnants of society not far behind. In Metro’s version of a post-nuclear Moscow, the locals deal not in cash but in bullets: either to barter or to deliver at high velocity into the face of the enemy. It’s not a place you’d take a family holiday. Even so, despite the toxic air and irradiated indigenous species, I kinda like it.

Last Light picks up from one of Metro 2033’s less joyful endings. It’s a straight FPS sequel, continuing the adventures of Artyom. While he may be the designated driver of the game’s narrative, it’s the grime covered environment that steals the show. Above ground, a scorched sky full of roiling cloud-banks hangs above a ruined landscape. Dilapidated buildings lean drunkenly against one another and dangerously mutated wildlife picks through the detritus of humankind. Despite the misery, it is a world of bleak beauty. Thanks to 4A Games’ artistic vision and technology, the ruinous bogs and ramshackle husks of 21st century civilisation pique a morbid curiosity.

In truth, there’s little time to admire the scenery. Artyom’s wrist watch keeps track of the alarmingly limited life span of his air filter, which has been removing the worst of the poisons from the air. Huw Beynon, THQ global comms manager, nudges Artyom through a sodden marshland that’s crisscrossed with pathways. Some lead to points of interest, others to dead ends. As he splashes through the shallow waterways, Artyom’s vision is obscured by water on the visor of his gas mask – it must be wiped clean manually. The goal is to salvage enough fuel to power a crude motor boat. Despite Beynon knowing exactly where he’s going and what’s ahead, he’s still threatened by the grotesque fauna and some worryingly sentient flora. After raiding makeshift shelters and the rotting carcass of a cargo vehicle, Artyom has the fuel he needs. All that’s left to do is power-up the generator that’s used to tow the raft. As luck would have it, the generator splutters into cacophonous life and attracts several armoured beasts that must put down using a combination of Last Light’s delightfully roughshod weaponry and some improvised explosives. Job done, Artyom chugs off into a tainted sunset, to no doubt face some fresh hell when he reaches his destination.

Perversely, it’s below ground, where the last vestiges of humanity dwell in near darkness, where there’s more life than survival. Our demo takes in two distinct underground areas. The first is a power plant patrolled by members of the antagonistic Reich faction. We watch as Beynon painstakingly extinguishes light sources, either by way of silenced rifle fire or by getting close enough to flip switches or disconnect light bulbs. In a neat narrative touch, the guards notice lights blinking out but think little of it: not much of anything works reliably any more. When a guard carelessly wanders over to investigate, bemoaning yet another blown bulb or faulty fuse, Beynon readies his knife. He checks the light indicator on Artyom’s wrist that tells him that he’s rendered near invisible by the surrounding darkness, and then pounces on the feckless fool. It’s in the second of the underground areas that Last Light really comes to life. Venice, as the locals have named it, is a den of vice and iniquity. The beleaguered population has turned it into a city-state, with its own rules, personality and flavour. In Venice, guns are forbidden. The peace affords Artyom a chance to take in the sights and sounds. There’s a wealth of incidental detail: a father and son dangle rods in one of many sludge-filled canals, while a nearby market woman plays it fast and loose with the term “fresh fish”. NPCs engage one another in conversation that is by turns humorous and useful, while the local thugs run a pleasure den where Artyom can glean vital narrative information or take in a show.

On his travels, Beynon stops by a street vendor to demonstrate the bullets-as-currency mechanic that almost didn’t make it into the sequel, after it proved divisive in Metro 2033. Here, individual military-grade bullets will buy several rounds of more common, less valuable ammo. Of course, the military grade ammo is also used in the most powerful and exotic of Last Light’s firearms: a balancing act is necessary to ensure Artyom is not caught short during a firefight. Artyom’s arsenal is a little more open than the previous game: he’s no longer restricted to one weapon from each of the three weapon classes. Instead, it’s up to the player to decide which combination of pistols, automatic and heavy weapons he’ll carry. A pertinent tactical consideration is how difficult it might prove to forage ammunition for any given load-out. After all, massive weaponry that’s rendered impotent by a lack of ammo doesn’t impress anyone.

Despite depicting a world in which the very air that Artyom breathes can kill him within minutes, Metro: Last Light possesses a refreshingly clear-headed focus. Now free of the considerations of multiplayer, 4A Games can concentrate its efforts on delivering the most polished, narrative-driven single-player experience possible for launch next March. Forced to watch from the sidelines, it’s the oppressive environments and twisted approximation of life that they play host to that has impressed me most. And so I look forward to the new year, when hands-on sessions will begin to reveal if Metro: Last Light really delivers.