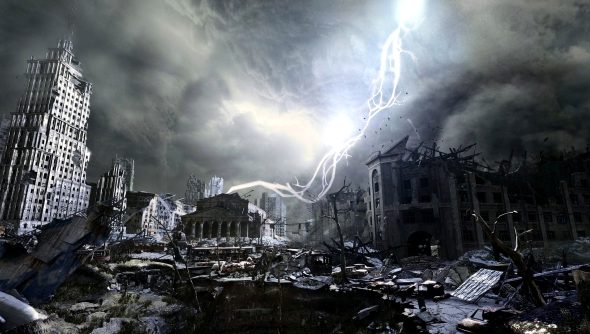 Based on novels grimmer than a builder’s gusset, Metro 2033 was a critically-acclaimed shooter that recreated the dank world of Moscow’s post-apocalyptic subway system perfectly. Having seen the astounding live-action trailer for THQ’s new title and watched the dark beauty of the game’s demo, we caught up with THQ’s closed-mouthed Global Brand Manager Mark Madsen to talk more about it.

I remember meeting the producer of Metro Last Light, Dean, who loved working on the title but hated the studio’s location in the Ukraine.

They definitely know bleak and depressing; it’s right outside their door.

Despite that, the PC version is probably the most beautiful game coming out this year.

It looks pretty darn good on the console, because the 4A engine is a multiplatform engine, and not much is lost in translation. It’s built from the ground up.

They’re not wholly owned are they?

Will you be using that engine for anything else?

I don’t know if I can speak on that.

PC-specifics, it was running Direct X 11?

It seemed to have extremely high quality textures. What specs will it need? Metro 2033 was a hungry beast.

It definitely brought your PC to its knees. We’ve been playing across all the platforms, PC, 360, PS3… the textures are still there. Some of the fidelity isn’t quite…

It’s something you could just release on the next-gen machines, as you’ve got it ready-made for PC. The scene we saw, going across the square to the theatre, through the plane. Are we going to see so many of those ghost elements?

We’re going to be dialing up the supernatural phenomena and flashbacks, as it enriches the story. Our main aim is to keep every moment-to-moment different and that’s a huge gauntlet.

Will you have Steamwork support?

Will you be avoiding Games For Windows Live?

Will it will require an always-on connection?

It’s a singleplayer experience. It’s not going to be a prequisite. You just pop it in and go.

Is it all going to be set around Moscow?

It’s in Moscow but you’re going to be exploring a lot more of the surface than you did in 2033. We do want to reiterate that it’s more than meets the eye. Today we followed the critical path, but our objective is to have a multi-faceted approach with most levels. The first one was extremely linear

We want to give you the freedom to explore and reward you for that. If you’re in a timecrunch and you just want to blaze through, go ahead, but if you want to explore more, get more narrative or get more resources, you’re free to do.

It definitely seems to reward and scare you for going off track. the first was scary partly because of restricted ammunition – you seem to have got rid of that.

Well, we still going to have the ammo as currency but we’re going to communicate it properly as most people didn’t realise it was part of the game.

How are you working that?

We’re not going into specifics about how we’re overhauling that system, but you are going to be faced with specifics regarding that decision, in a more straightforward way. Do I save these currency bullets to take out this enemy a lot easier, or do I save it to purchase something more valuable down the road? It’s going to be a more integral part of the game.

CoH is going to the east.

Metaphorically, from the ashes comes THQ.

It’s amazing, this crisis doesn’t seem to have affected the production of any of these games.

No. We’re in full swing. You saw the trailer. That’s just to show how confident we are in the game

Where was that filmed?

It’s in Kiev, in the Ukraine. I don’t know if you remember hearing in the news right around the end of January, record cold, people dying? That’s pretty much when it was shot. The elements were just right. They looked pretty miserable… because they were. We also wanted it to have that stamp of authenticity. We could easily have shot it in Los Angeles, but we thought it would be shot in Kiev. Multiplayer, you’re not talking about.

Correct. It will be uniquely Metro and we’re still laser-focused on creating a high-polished single-player campaign. Multiplayer is nice to have.

Any involvement from the author of the books still?

Yep. He’s in lockstep with us in creating the story for Metro: Last Light, een though this doesn’t follow the Metro 2034 narrative. We have his voice, and you see it throught the game?

Do you think you’ll ever be able to reintegrate the storylines or have they completely diverged?

It’s something we’ve thought about, we’re just going to see how shape out.

Are we going to see any returns of the factions?

Yes. What we really love about the Metro 2033 story is that, underground, it’s a microcosm of what’s happening today. Even though we’re so few, we’re still at odds with one another. And we love that. Metro suits an MMO. Would THQ ever consider taking the series that way.

I’m sure, with great success, that could be a consideration.

Do you think this will be a shooter of the year experience?

I think it will be critically well-received. We’re not looking to compete with the super-mass audience, like Medal of Honor and Call of Duty. I think when you look at the Dead Space, Bioshock, even Borderlands, we can stand alongside those guys.