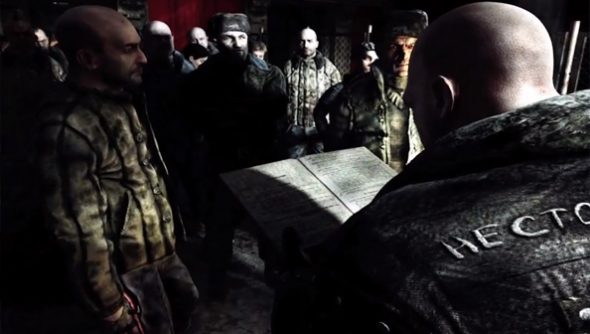 While other big-hitters in THQ’s conveyor belt of upcoming releases were shuffled, shaken and shunted about on their temporal line, biggest of the hittest Metro: Last Light remained relatively unhassled. Metro’s now multiplayerless, but still set for a slightly adjusted March 2013 release date. That’ll be practically tomorrow once we’ve got Wintersday out of the way.

Here’s a risky glance around the radiation-carpeted environs we’ll be stumbling across next year.

For the first two minutes or so of Russian-tinged voiceover, I thought 4A Games had rather poetically cast the atom bomb as a new, vengeful God. They haven’t, but the footage is intermittently affecting nonetheless thanks to 4A’s dedicated approach to humanisation.

Looks good, dunnit? In our Metro: Last Light interview, THQ’s mostly schtum Mark Madsen said that the game isn’t intended for super-mass market success, but will instead stand alongside the Dead Spaces, Bioshocks and Borderlands of this world.