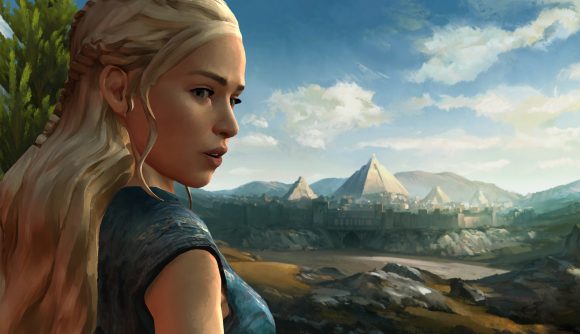 Game of Thrones might be nearing its end, but that doesn’t mean that we’ll be turning our backs on Westeros for good when the latest series reaches its conclusion later this month. Recent teasers make it look as though Microsoft is involved with something to do with HBO’s fantasy series.

Xbox’s official social media channels posted brief teasers last night. Over on Twitter, a burst of flame parted to reveal part of the Targaryen family crest. On Facebook, that fiery theme was replaced by a blizzard, which gave way to reveal the Night King’s glyph. Both posts were accompanied by the caption “and now your wait begins,” referencing the Night’s Watch vow, and an instruction for fans to stay tuned.

For the moment, that’s all the information we have, but it definitely looks as though Microsoft is gearing up to announce something related to the popular TV show. With E3 just around the corner – and considering how much Phil Spencer has played up Microsoft’s showing at the conference – next month seems as good a time as any for a major announcement.

These are, of course, Xbox teasers, but many of the console’s recent major titles have also been released for PC. While there’s no guarantee that’ll happen this time around, I’d say the odds are reasonably good.

Valar morghulis: Need a Game of Thrones game to play? Check out our list

A more interesting question, however, is exactly what Microsoft has planned. A Game of Thrones game could focus on any one of dozens of potential stories from across the seven kingdoms. HBO is said to be working on at least three successors to Game of Thrones – one reportedly linked to series author George R.R. Martin’s book Fire and Blood, a history of the very same Targaryens teased in the tweet below.

As for what could be on offer when it comes to games, however, it’s anybody’s guess. Rich says that he’d opt for a turn-based strategy title with a well-developed espionage system, but I like the idea of something a little more like Mount & Blade or Crusader Kings, where you have to build alliances to let you play the Game of Thrones for yourself. Whatever Microsoft has in store, however, its E3 showcase should provide some answers.