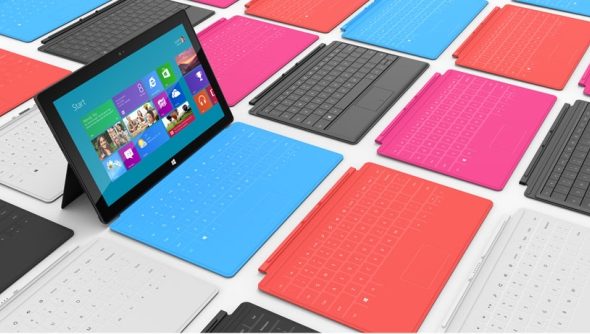 Can it game? That’s all I really wanted to know when Microsoft unveiled their new tablet last night: their iPad aping Surface has Windows 8 at its core, a case that doubles as a keyboard and mouse, a lot of power. The answer to that question is apparently dependent on what version you choose.

With Windows 8 as the OS, there’s a chance PC games could natively play on this tablet: instead of having to play a mobile app, you could be playing the full-featured PC version. There are currently two versions of Surface: Windows RT and Windows 8 Pro the first doesn’t have the software or the hardware to power a full PC game, but the second does.

Microsoft talked a lot about the case, the stand, etc. It’s really the innards you need to consider: RT has (and is) the mobile Windows operating system, running on an ARM processor and a Nvidia Tegra chipset, a typical tablet set-up that will only allow apps written for that OS to run on it. It’ll squeeze those into an 1366 x 768 resolution.

Windows 8 Pro Surface, on the other hand, is comparable to an Ultrabook: it will run a full version of Windows 8, it has the latest Intel Ivy Bridge Core i5 CPU, a 1080p display, both include USB ports, and the Pro will have 64GB or 128GB of storage. It has a DisplayPort that you can hook up to an external monitor.

More importantly, hidden under the Metro interface is a typical Windows desktop, one that popped up when they demonstrated that the Pro flavour is powerful enough to run Photoshop. Skip to 20 minutes in to see that.

What they didn’t show is it running any games natively. But then they didn’t drop any graphics specifications or available RAM, either. It might be that those are sticking points with forcing a desktop PC into a tight 13.5 millimeters frame, but if they’re claiming it could double as a desktop, and they are, there’s some horsepower in there. Imagine a tablet that could run Steam? This is that. And there are plenty of low-spec indie games and classic PC games that require the most bsic set-up to function. I’m cautiously optimistic that that Microsoft might have quietly made a half-decent PC gaming device. I really hope they realise that.

There’s no cost currently mooted, but both are expected to be comparable with their counter-parts. So when the RT launches at the back-end of this year, it’ll probably be about £400. The Pro will be three months after, at at least £700.