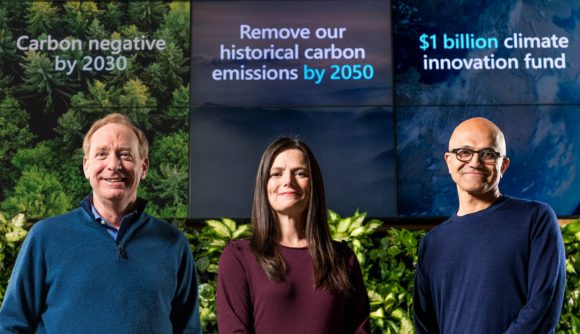 Microsoft and its entire supply chain promises to be completely carbon negative by 2030 – when the tech company will be actively removing more carbon dioxide than it’s creating. It’s also set a lofty goal to remove more emissions from the atmosphere than it has created since the company’s founding in April, 1975.

“While the world will need to reach net zero, those of us who can afford to move faster and go further should do so,” Microsoft president Brad Smith says in a blog post. “That’s why today we are announcing an ambitious goal and a new plan to reduce and ultimately remove Microsoft’s carbon footprint. By 2030 Microsoft will be carbon negative, and by 2050 Microsoft will remove from the environment all the carbon the company has emitted either directly or by electrical consumption since it was founded in 1975.”

Microsoft has outlined a plan of attack for reducing its emissions, not just internally but down its entire supply chain, too. There’s also a new $1bn Climate Innovation Fund, out of the company’s own deep pockets, intended to accelerate the research and production of technologies capable of carbon reduction and carbon removal.

“Solving our planet’s carbon issues will require technology that does not exist today. That’s why a significant part of our endeavour involves putting Microsoft’s balance sheet to work to stimulate and accelerate the development of carbon removal technology.”

Microsoft’s setting a strong example to other major tech firms, and a $1bn fund is anything but token. While I trust big businesses to do the right thing as much as the next guy (that is to say very little), there’s a solid plan backing up Microsoft’s positive press bites – and lord knows we could do with some action around here.