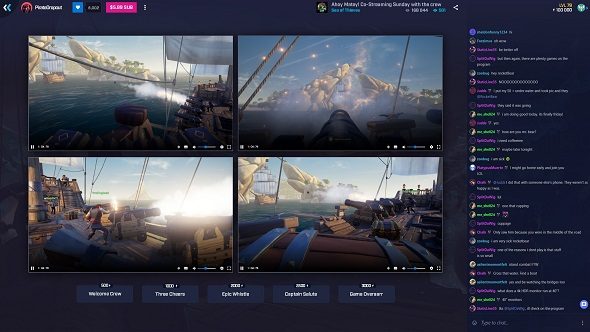 Originally introduced as Beam back in Windows 10’s Creator update, Microsoft are rebranding their streaming service to reflect its new features. Now called Mixer, the service is focused on bringing streamers and viewers together using its community tools.

Find some decent games to co-stream with our list of top PC co-op games.

First off, Microsoft are touting Mixer as the first proper ‘live’ streaming service. This means there will be no “10 – 20 second latency” compared to other platforms like Twitch. They are also planning greater community integration features will certain games, meaning that viewers can interact directly with the game by commenting in the chat for example. Games like Clustertruck and Domina have already experimented with Twitch integration, and Microsoft are already at work bringing these features to Minecraft.

Telltale have already begun experimenting with a new feature called Crowd Play, where people in the chat can vote directly for dialogue options during an adventure. According to Microsoft, this kind of feature only works “on a service without latency issues” which Mixer is supposed to be. Telltale are planning to bring Crowd Play to “all their future projects”, so expect Mixer Plays Telltale streams to pop up in the future.

As for streamers, Microsoft have released new co-streaming support for Mixer. This means up to four people can combine their broadcasts together via a single split-screen window. Co-streaming is perfect when playing co-op games like PUBG or League of Legends, as viewers can keep track of what each streamer is doing in a match. Co-streaming is not limited by game or device; four streamers can broadcast together no matter what game they are playing or device they are on. This means you could have one streamer playing on Xbox One, another on PC, another on their phone and another on a Surface tablet. For connecting streamers together, that’s a pretty big step in technology.

Mobile game streaming is planned for a future update and Microsoft have also launching a special curated Mixer channel, which shows the best content currently being streamed via the service. I can imagine a lot of streamers who play co-op games will begin using Mixer and it seems the perfect way to watch a tournament with multiple streams going on at once.