I really want to love Middle-earth: Shadow of War. I have seen it spawn incredible anecdotes: social media is full of people regaling us with tales of the brave orc who saved them from certain death, ripping off a rival’s head in a bloody display, and orcs who doggedly returned from the dead to exact revenge on protagonist Talion. I saw a tweet thread the other day about a player who had his orcs turn on him because he made them slay their blood brothers. I generally love games that can manage this, to offer personal experiences through the emergent stories generated by their interlocking systems – it is why Dishonored 2 is one of my favourites. But Shadow of War just is not doing it for me.

In the middle of your own orc-slaying campaign? Plan your upgrades with our Shadow of War abilities guide.

The same thing happened with its 2014 predecessor, Shadow of Mordor. By the time I was done trudging through its brown opening area, I was tired of Batmanning the crap out of orcs. It is relentless. You are almost always fighting a horde of angry green swine, but the combat isn’t deep enough to carry the game without the full strength of the Nemesis system backing it up.

If you are not familiar with it, the Nemesis system tracks your encounters with high-ranking orcs – and even grunts who are promoted if they manage to kill you – and has them acknowledge your previous battles in a short cutscene the next time you meet, perhaps with a new scar or two snaking their visage. It’s like wrestling, if wrestlers had names like ‘Shag the Alchemist’. 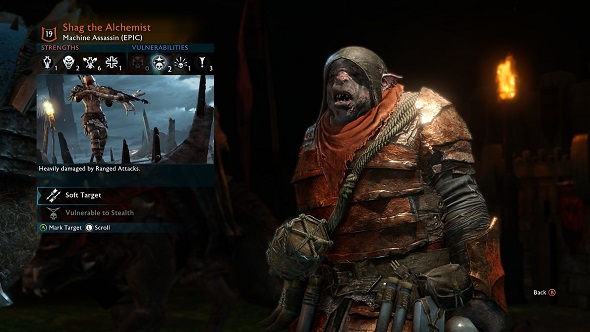 It is an interesting hook, but it only gets really interesting once you gain the ability to dominate orc minds and bend them to do your bidding. You can have them spy on warchiefs for you, you can get them to kill other commanders, or you can even have them fight at your side. It is when they start interacting with other orcs when things get clever, creating rivalries and even opening the game up for some treachery. But here’s the kicker. I am currently ten hours into Shadow of War and I am still doing the tutorial for the Nemesis system. Ten hours! I want to keep playing but, as crunchy as the combat is, I am already feeling burnt out on orc battering.

Shadow of War has a real issue with padding. There are a bunch of areas where this sequel is a clear improvement over the first game. For one, loot is much more meaningful, though your new ornate armour, gilded blade, and shiny new dagger do not show during cutscenes. The environments are much prettier, too – more varied (I mean, it’s not /all/ mud), and overall a lot more fun to explore. It is a gorgeous game, though you often will not be able to appreciate it as you spend a lot of your time racing across the world at superhuman speeds – it is the only way you can avoid the constant stream of orcs that populate the land as you sprint towards the next objective marker. 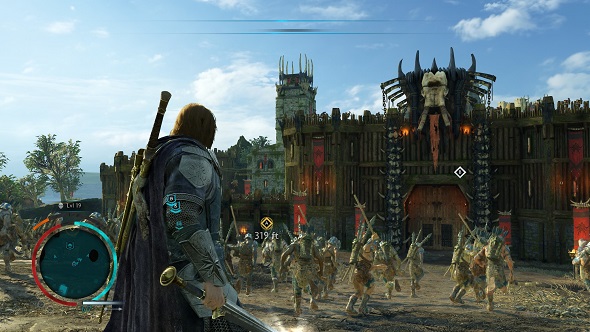 Those objective markers are also an issue. There are too many of them. The way the world reveals itself to you is over-familiar – you climb towers which act as fast-travel points, activate them, and open up a bunch of nearby activities, littering your map with side-quests. You might be an immortal killer, but you feel like you are cleaning Mordor up, one icon at a time. This sequel does a better job at pulling you through the story, but there is so much filler, and all of it is front-loaded, hiding all the best moments behind busywork. The fact you get no room to breathe in this orc-filled world only exasperates the issue. Shadow of War does not understand the importance of downtime. It is as subtle as Quentin Tarantino’s foot fetish.

Another complaint I have is how prescriptive it can be. This is a game that is supposed to be about expression – violent expression. The Nemesis system suggests you are free to play your way, yet there are multiple missions that will fail because you went slightly off the beaten track. There are also missions where being spotted is an automatic failstate. In a sandbox game like this, you should be free to adapt to situations and find your own solutions to problems as they arise – that would allow the core mechanics to let you write your own tales, just like the Nemesis system. It would make the whole experience feel more cohesive. 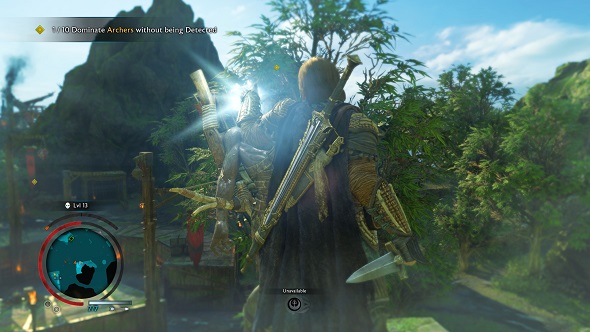 It is rather buggy, too. My most memorable emergent story is when I tracked down an orc commander who I wanted to recruit. He was on a pier, and all hell broke loose when I started fighting him – poison clouds swirled around, bear traps were dotted about, and a vicious beast called a caragor got free from its cage. I took the beast’s health down and rode it. My mounted attacks quickly got the orc’s health down, but I needed to dismount to dominate him. Dismounting on the pier teleported me inside a nearby mountain, clipping through the hard rock, from which I could not escape. Some lowly orc got a promotion that day since their arrows could still reach me.

While I am at it, let’s briefly talk about the problem I have with the controls. Combat feels satisfying but it is governed by magnets. You hit an orc, flick the stick in another direction, and Talion leaps to them to deliver another blow. This works great in the Batman: Arkham games, but Shadow of War’s fights are often littered with environmental hazards – fire, poison, traps, and more – and that is an issue when movement is automated and you are unable to cancel it. Its parkour-style movement as you explore fortresses and weave between the seas of writhing green muscles is lorded over by the same stickiness. Context-sensitive buttons cause similar annoyances, like when you want to escape a fight and end up vaulting some orc who is immune to vaulting, so you end up thrown to the floor.

I really want to love Shadow of War. I really want the stories I was promised. I will keep playing it until I see what everyone else has, but for now I think it has issues that are far more prevalent than its loot boxes, despite them being at the centre of a swirl of controversy surrounding release. I will keep plugging away, though, in the hope that Shag the Alchemist has some tales to tell.