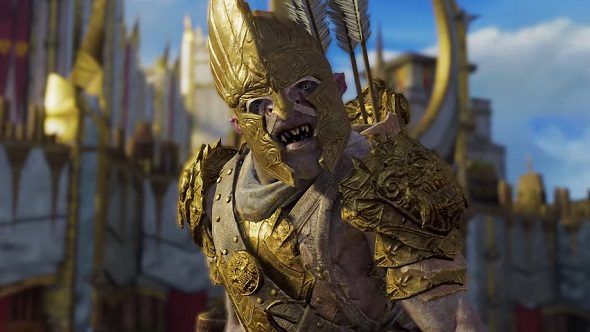 Even orcs enjoy the finer things in life. While the other orc tribes in Mordor are subsisting on crap grog and overcooked warg, the Marauder Tribe in Middle-earth: Shadow of War only enjoy the finest oliphant meat from this side of Far Harad.

Here’s everything we know about Middle-earth: Shadow of War.

Shown off in a new trailer, the Marauder Tribe are orcs with a love of excess. They wear gold-trimmed armour, build fortresses in the style of Elven citadels, and drink the finest vintage grog. If any tribe was going to put spinners on their catapult wheels, it would be the Marauder Tribe. Considering that their trailer is cut together like a bad ’00s hip-hop video, I wouldn’t be surprised if Marauder orcs have to rap battle each other for places in the tribe hierarchy.

With their love of gold and theatrics, you’ll want to side with the Marauders if you want your orc army to have a bit more razzle-dazzle. They’ll probably make great Nemeses as well, full of pomp and circumstance as they lounge about in their ivory towers. I can imagine these are the orcs who really pushed for microtransactions in Shadow of War – prime warg fillet doesn’t pay for itself.

You’ll be able to join up with the Marauders on October 10, when Middle-earth: Shadow of War launches. Get your gold chains shined up in readiness.