After an hour with Middle-earth: Shadow of War, getting my hands dirty in a couple of sieges, I’ve had a good taste of the new systems at play in this bulkier sequel to 2014’s Shadow of Mordor. Some new abilities, like Talion’s double jump, are brilliant fun, shifting the way I played the game significantly, but others like the siege objectives are disappointing.

Want to get started speccing out your Talion? Check out our Shadow of War skills guide.

Rather than waste time, let’s get down to the nuts and bolts of it. 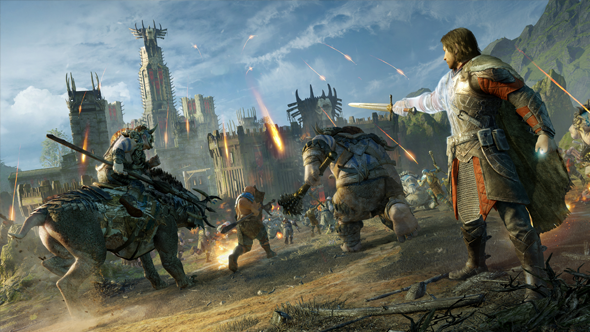 Sieges are the big new feature of Shadow of War, seeing you assault great fortresses across the lands of Mordor with an army of orcs that you’ve bent to your will. The scale of the battles is larger than anything available to you in Shadow of Mordor, and throws a tactical layer over a game that previously focused on you powering through combat while a handful of friendly orcs fought around you without your input.

In Shadow of War, before a siege, you select which captains to bring into battle, each leading a different unit of soldiers, so you’ll want your selection to provide a spread of unit types. Neglect to bring siege weapons and your soldiers will struggle to crack the walls into the fortress. Leave archers behind and your orcs will be picked off from the battlements. And without your basic grunt to act as a meat shield then you specialist units may get torn apart by the sea of defenders.

As well as picking your captains, you can spend upgrade points to augment your captains’ contingent – adding a hulking graug to their unit, a pack of ravenous caragor, or a clutter of venomous, dog-sized spiders. All of these can help in your assault, though it means you’ll have fewer basic troops in exchange for fielding these monster special units.

Once the battle starts, your command over your army being limited, the game largely leaving you to concentrate on your own acts of individual savagery. Your captains will charge at the fortress’ walls, their men will follow, and if you climb a tower and survey the battlefield, you can watch a scrum of orc-on-orc violence. The only time I found myself needing to interact with my army was when my captains were downed in combat – an icon would flash up to let me know they were bleeding out and needed my assistance.

…but it’s a messy one 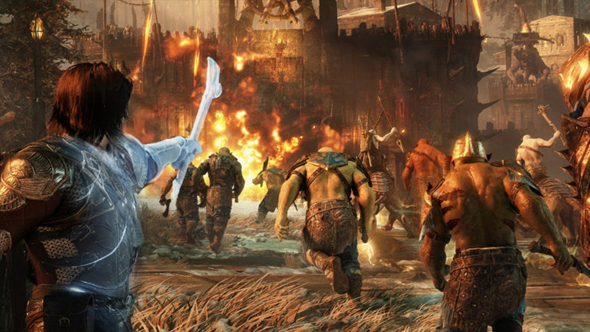 You can’t just march up to fortress warlords and smack them in the nose, you’ve got to take all the capture points first. These are hot spots around the fortress where you need to hold the ground until they fall under your control. The orc in the ointment is that the defenders’ captains tend to cluster in these spots, making taking each point a hard fight. Frustratingly, it also makes for a very messy one.

As with Shadow of Mordor, each captain has their own strengths and weaknesses. Some can’t be damaged by ranged attacks while others will dodge melee attacks; some are particularly vulnerable to fire, while others become enraged by it, buffing their damage; you can vault some captains, stunning them, whereas others will smack you to the floor for trying. This all adds a unique flavour to each individual scrap you get into, but I found that in sieges it only muddied the already chaotic battlefield.

You’re trying to hold a patch of ground, enemy and friendly orcs fighting all around, your captains spread out across the fortress in their own fights, often being downed and needing your help to get back into the fight – among all that you’re having to the cluster of enemy captains defending the capture point, each with a different set of strengths and weaknesses to figure out and exploit. I couldn’t find my flow, which is where Shadow of Mordor was at its best. I’d try to strike one orc and find it would dodge my attacks, so I’d leap to take out another captain first and get knocked down because they couldn’t be vaulted, then I’d try to shoot the captain in the head and find they were immune to ranged attacks.

With so many different factors to take into account, while also trying to keep an eye on the bigger picture of how the assault is going, I couldn’t enjoy the siege battle.

The new double jump is a lovely, lovely thing

It may seem like a small thing, but the new feature with the biggest impact in how you play Shadow of War is the new double jump. Now, whenever Talion finds himself airborne, with the help of Celebrimbor, you can tap ‘A’ to launch yourself forward through space. This new reach to your leaps opens the world up, closing the distance between fortress towers, helping you speed across rooftops, or save yourself from an embarrassing, misjudged tumble.

Where the new jump best makes itself known is what it does for linking together abilities. There was a point in the demo where I was trying to kill archers hidden at the top of a couple of tall, widely-separated towers. I’d scaled one tower and beheaded the archer at its peak but from my position I couldn’t see the archer in the next tower over. However, I could spot them if I leapt out into open space, boldly double jumping into the grey of the sky. From my new position I had a clear view round the parapet that had blocked my view of the orc, so I held down the left trigger – which drew my bow and slowed time – lined up a shot on the orc and tapped ‘X’, which teleported me to the top of his tower where I executed him.

I had many moments like this throughout my session with Shadow of War, where this new jump range expanded the way I saw how to use my abilities, and how to navigate the world.

You now use abilities to define your Talion 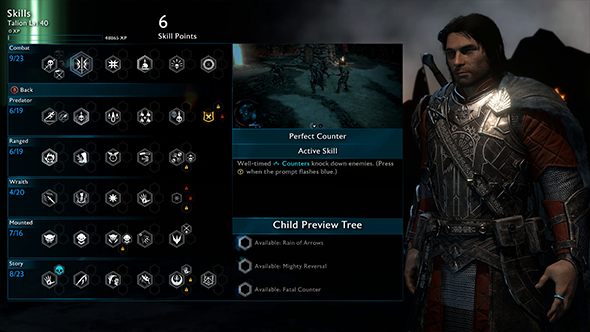 Shadow of War brings a significant change to how you unlock abilities, and it’s one that’s going to force you to make some hard decisions. In Shadow of Mordor you grew more powerful by unlocking all your abilities. Each upgrade would augment how you played, making your combos more violent, your stealth attacks more deadly, and opening up the creatures you could bring under your control. By the end of the game you were monstrously strong.

In Shadow of War, you still have access to tonnes of abilities, but you can’t use them all at once. The way it works is that you have major and minor abilities. You can unlock all the majors and, then, for each major, activate one minor ability upgrade at a time.

Take, for instance, Execution. It’s a major ability that lets you instantly kill an enemy orc in gruesome fashion once you’ve built up enough of a combo. You can then augment that ability with one of three upgrades – Secret Might, Grim Resolve, or Fatal Might. The first gets you a might buff for stealth kills, the second gives you might when you receive damage in combat, and the third increases the might you get for each successful sword strike. Depending how you play, then, you’ll want to be selective with the upgrade you use. Stealth players should go for the first, players who aren’t that great at building up combos should opt for the second, while players who can string together attacks without taking a hit should go for the third.

This shift in the upgrade system means that you’ve a multitude of ways to define how you want to play, simply through the upgrades you choose. It’s a potentially powerful system, and one that may limit you to become quite so godlike by the endgame.

Monolith have clearly put a lot of work into adding character to their orc captains, with a much greater variety of clothing and body shape than last time around. It’s a worthwhile investment, considering how much of our time in the game is going to be spent building relationships with them – either as great allies or terrible nemeses. However, it feels like they may have gone a little overboard in the script department. They’re all chatty so and sos.

As with Shadow of Mordor, whenever you engage with an orc captain on the battlefield, the game pauses and the camera gets in close on the captain, who delivers a line of dialogue. It’s also your opportunity to inspect their strengths and weaknesses. But, as you’ll sometimes be engaging a string of captains in quick succession, every single pause drags out the combat and breaks you out of the flow of the fight. This was an issue with the first game and it’s only been made worse by making their lines longer.

That said, it is perhaps due to the wordiness of the other orcs that when I came across Kruk the Screamer, I fell in love. He does exactly what you’d expect from a title like that – his character introduction is just a high-pitched, manic scream. I immediately drafted him into my army. When he was killed by another captain I felt the true pang of loss. Screaming into the air felt like the best way to let it out but, given that there were people around me, I refrained. 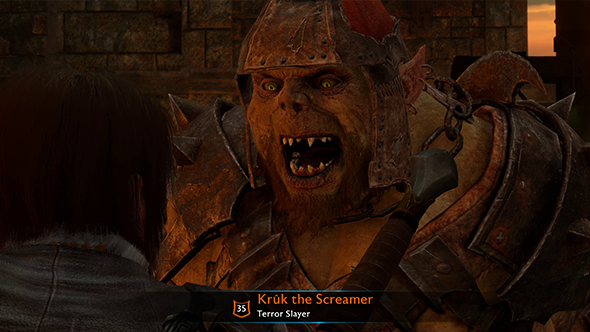 Something to take into account with the demo I played is that I wasn’t dropped in at the start of the game, I was battling against high-level enemies and having to make sense of systems that weren’t properly introduced to me. It may be that the confusion I faced in the siege would be lessened if I’d been through simpler sieges in the past and had a better sense of everything I had at Talion’s command.

There were flashes of the game coming together when it felt like the old Shadow of Mordor, and that’s what I’m chasing: the flow of battle where I’m engaging a rabble of orcs, whittling down their numbers with executions, elf-shot, and crowd control abilities. If Shadow of War hasn’t buried those moments under these new systems, but instead found new ways to encounter them, then we could be in for something special.