Middle-earth: Shadow of War, like its predecessor, features an ever-changing collection of randomly generated orcs. Thanks to the multitude of components that piece together these orcs’ appearances and personalities, each feels like a real character rather than the result of some maths.

Are the orcs good? Find out in our Middle-earth: Shadow of War PC review.

It is inevitable that you will stumble across more than a few memorable monsters on your journey through Mordor, but here are five favourites that I encountered in my own Shadow of War campaign. 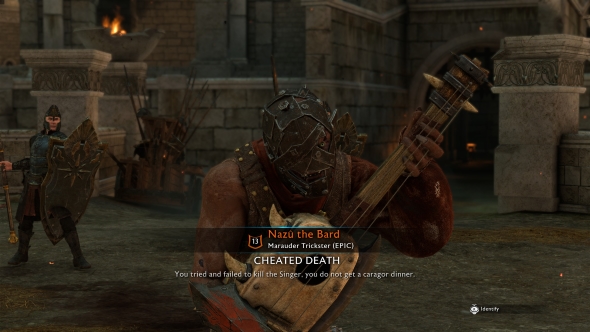 Some orcs opt for a serrated blade, while others take pleasure in swinging a flaming brand. Nazu was different though. He chose the way of the lute. Rather than growling insults as our blades clashed, he sang rhymes of how I would soon be caragor dinner. An orc voice is not musical in the traditional sense, – or, perhaps in any sense – but I couldn’t help but be charmed.

In payment for his performance, I set him on fire.

But even purging flames couldn’t stop Nazu’s ballad. He returned, body charred and face replaced with a metal mask, to chase me once more. I thought a sword through the belly would be a clear enough message that he wasn’t getting through to the next round of Mordor’s Got Talent, but he returned with his battered lute a further three times.

His final appearance was in Shadow of War’s concluding chapter. Yes, he had made it to the very end of the game, still warbling with grating notes. I booted him 300-style from a bridge. Hopefully, he got the message this time. 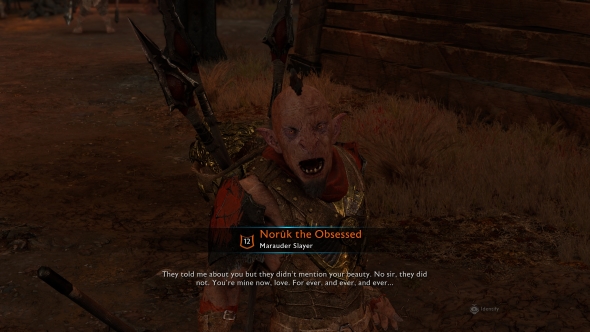 Noruk the Obsessed is the orc equivalent of Papa Lazarou, the creepy collector of wives from BBC comedy The League of Gentlemen. Or, for a more contemporary reference, a creepy guy on Twitter that slides into DMs to demand someone be their girlfriend.

“They told me about you, but they didn’t mention your beauty,” he sneered on our first encounter. “You’re mine now, love. For ever, and ever, and ever…”

With shivers making their way up my back, I ensured Noruk’s spine would never meet his skull again. I have no time nor tolerance for lecherous stalkers in my campaign to dominate Mordor. 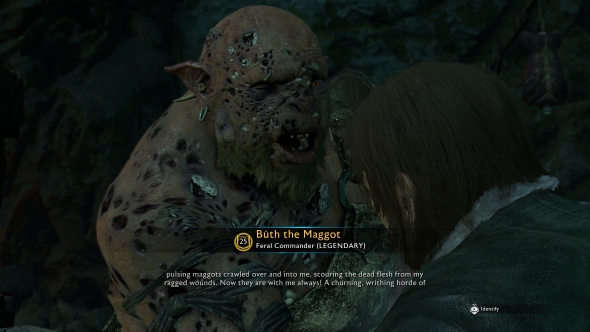 When first clashing blades with this heaving pile of flesh, I mistook him for a lost member of Arrested Development’s Bluth family. Turns out I had made a huge mistake (there’s an ‘L’ missing), but he was just as horrendous as Lucille on a bad day. See, the ‘Maggot’ segment of his name comes from the fact that, even before we met, Buth died and saw his corpse become home for an army of maggots. They burrowed through his face, which explains the holes. I imagine this all came as quite a shock when he was resurrected.

Despite being a legendary-rank commander, Buth’s face roused such a revulsion in me that I went straight for the kill. Our relationship was short but I cannot say it was sweet – the taste it has has left in my mouth is acidic. 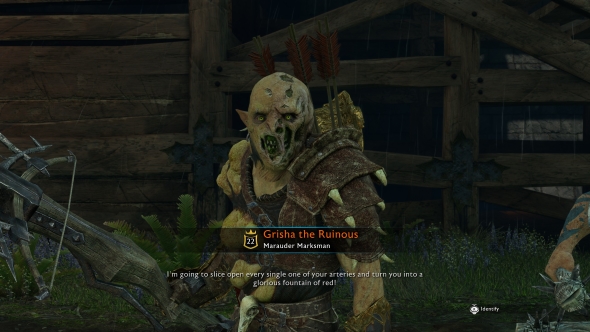 Ah, Grisha, what a time we had together. I was instantly taken by his face, which was presumably styled after Gotham city’s Harvey Dent. ,‘Now that’s a visage perfectly suited to the army of the Bright Lord’, I thought. Sure, he was threatening to slice open all my arteries and turn me into a fountain of red, but a gentle hand on his cheek would change all that. So I branded him and enrolled him in my horde.

Hours went by and, oh, the fun we had together. We butchered orcs from Minas Morgul to Seregost, all the while laughing at the way they would wobble and shudder as we plunged dagger after dagger into their green flesh. But our friendship was not to last. Grisha turned on me, you see, stabbing me in the back when I least expected it.

I chopped his head off. No point getting sentimental, right? 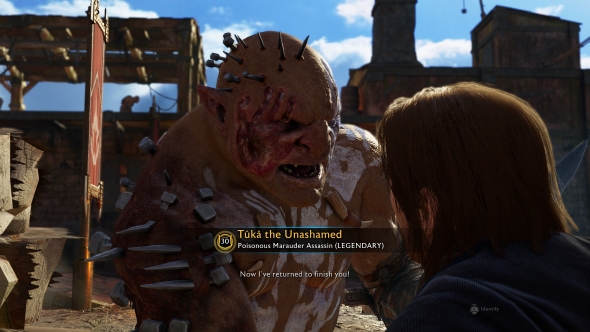 Tuka is a real treat. Originally one of Saruman’s fighting Uruk-hai, he is decorated with white handprints and has a variety of nails hammered into his bones. Tall and muscular, he proved a formidable opponent during our first encounter.

So strong was his dedication to Saruman that he refused to join my ranks. I spied potential in him, though. Rather than slice his head from his shoulders, I shamed him – a mechanic that reduces an orc’s level and makes them easier to capture on your next encounter. Shaming also leaves a gross palm-shaped burn on the victim’s face. Matches the white hand motif, I guess?

Several hours later, Tuka returned to take his revenge. Reduced in power, I easily dominated him and forced him to work for me. And to this very day he remains a loyal servant, acting as Overlord at my fortress in Gorgoroth. Proof that you genuinely can have a happy ending in the land of Mordor.