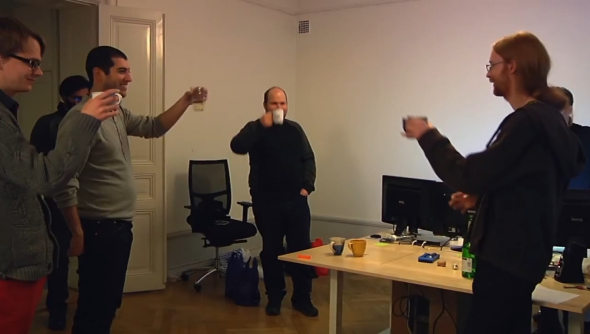 At last, it’s almost here. Minecraft: The Story of Mojang is a documentary film examining the studio and the people behind this phenomenally popular game. It’s been more than a year and a half in the making, first announced in February last year and funded via Kickstarter long before that site became a household name among gamers. The film will be released this Sunday, December 23, and can be downloaded or bought on good old fashioned DVD.

If the name 2 Player Productions sounds familiar to you, that’s because they’re the same production company who are documenting Double Fine’s work on the adventure game they Kickstarted this February.

Interiewees that you may well recognise include Peter Molyneux, Tim
Schafer and Mike Krahulik, better known as Penny Arcade’s Gabe.

I’m excited. I’m also delighted by the idea of more documentaries that explore the creative process-cum-downright slog that is game development. Thousands of people around the world are making video games all the time and we should have more making ofs, in the same way that we have documentaries that examine the making of films or albums. Let’s hope that films like The Story of Mojang and Indie Game: The Movie are the first of many.
{"schema":{"page":{"content":{"headline":"2 Player Productions release trailer for Minecraft: The Story of Mojang","type":"news","category":"minecraft"},"user":{"loginstatus":false},"game":{"publisher":"Mojang","genre":"Survival","title":"Minecraft","genres":["Survival","MMO"]}}}}