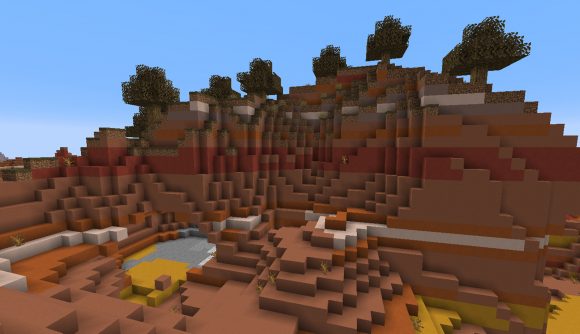 Mojang has plans for three major Minecraft biome updates, so we’re going to see major changes to the swamp, mountain, and badlands locations in the relatively near future. But which one’s coming first? That’s not a rhetorical question – the developers want you to answer in a big vote to see which changes are coming first.

The biome vote takes place as part of the Minecon Live stream on September 28 at 9:00 PDT / 12:00 EDT / 17:00 BST, which will broadcast across basically every streaming platform on the face of the internet. Viewers will be able to vote for the next biome update during that stream, much as they did last year with the selection between taiga, savannah, and desert.

Badlands, mountains, and swamps will all get new features, mobs, and mechanics, and Mojang plans to offer video previews of all the new stuff leading up to the vote. Regardless of which biome wins the decision, updates for all three are coming – it’s just a matter of which update lands first.

You can get more details on the official site.

Or watch the developers explain it in the video above.

Our latest check-in with the Minecraft player count confirms that yep, it’s still totally the biggest game in the world. Don’t expect those updates to stop any time soon.