Barely a day goes by without someone making something ridiculous and amanzing in Minecraft, but it takes a special kind of dedicated to not only master the art of block building but also the rules of time and space. Reddit user ModelZXGiro has managed to achieve at least one of those by amalgamating over fifty mods to create a Tardis in Minecraft that – while it can’t properly time travel (yet) – is certainly bigger on the inside than it is on the out.

According to ModelZXGiro, “I already have over 100 rooms planned”, and there’s a huge gallery illustrating both the already vast spaces inside the construction and that Tardis’ ability to blip and phase around the Minecraft world, appearing lodged in rocks or in the middle of deserts.

It’s not entirely clear how exactly it works, which is appropriate given that it’s an inter-dimensional time machine, but at the very least ModelZXGiro is going to attempt to elaborate on the Tardis’ time-altering functions beyond just changing the time of day, stating: “Once I finish, maybe I can convince some modders to actually help me make REAL time travel, like going through versions, and older player worlds.” 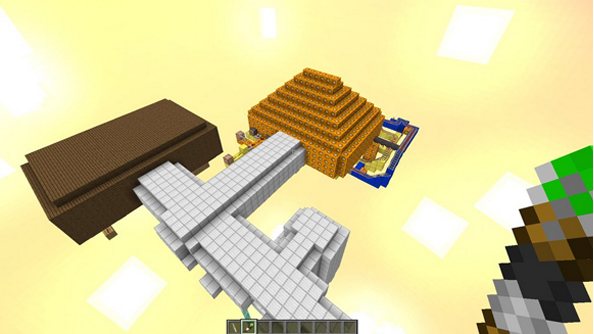 There’s a video to come, and hopefully a download link so that you can get closer to becoming a Timelord than just dipping the occasional fish finger in a bowl of custard on a lonely Sunday evening.