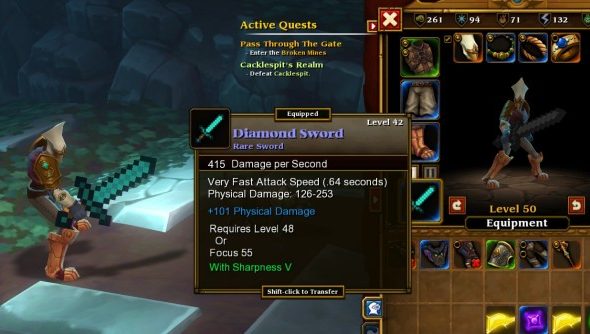 Over the last couple of days, you might well have noticed a couple of new games have been giving a tip of the hat to Minecraft. That’s jolly friendly of them, but it’s hardly anything new. Minecraft is one of the most referenced video games ever, a testament to its popularity. Here are its most famous appearances.

Hidden away in the corner of one of Act III’s maps is Notch’s Mine, a a


mini-level populated with several creepers and and a chest that will
contain one of Minecraft’s swords. Be careful of those creepers, mind,
even in other games they’re still extremely explosive.
Borderlands 2

Gearbox’s game is full of easter eggs and references to other titles, many of
them hidden away in the corners of its maps. In the northwest corner of
the Caustic Caverns that lie under Sanctuary, you’ll notice a few mine
carts on a bridge. Slipping past them and jumping down a ledge, you’ll
find a way into a cave full of Minecraft blocks and, once again, very
agitated creepers.

Wipe these guys out and you’ll be able to collect skins that they drop, as
well as mine away at the blocks around you to grab gold and other
goodies.

Choplifter
also references several other games, and Minecraft’s Steve can be found
stranded on a small blocky island in the mission All on the Table.
Bring him back home for a bonus.

Choplifter also references another famous indie game which itself features Steve, and that is…

Steve is a playable character who you can unlock by collecting bandages.
Though he can’t run (which will make it impossible to complete some
levels), Mr. Minecraft can remove and place blocks at will, allowing you to rebuild the level around you.

The Binding of Isaac

Now,
is this really a reference to Minecraft, or is it a reference to Skyrim
referencing Minecraft? A Notched Axe was added as part of the Wrath of
the Lamb DLC and, predictably enough, it can be used to break through
rocks. Probably the most famous Minecraft reference of all, the Top Notch hat was given to Notch after he said that nobody believed it was him
they were playing Team Fortress with. It’s a very nice idea but it
probably makes him one hell of a target. And don’t forget… Notch is in FTL

That’s right, he’s included in the roster of names, which means he may end up as a crew member working on your ship or an adversary that you’ll have to face. This isn’t a deliberate reference, Notch turns up because he’s one of many people who funded the FTL’s Kickstarter campaign and who now appear in the game as thanks. Here he is piloting the Rebel Flagship.

In time, this will start happening to many more of us, those of us who have bought our way into games like these. Perhaps in a year or two we can all make lists of the games that reference us, eh?