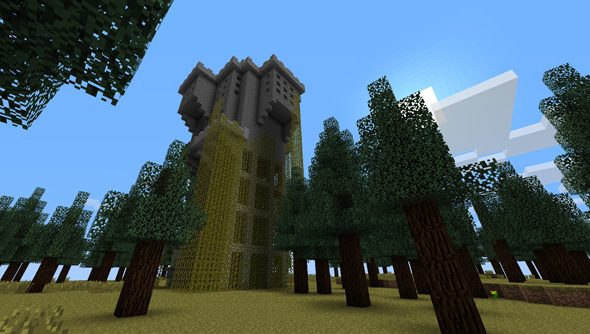 I’ve been playing the MineZ public beta, the DayZ inspired, server-side Minecraft mod that chucks 150 players into a zombie-infested open world and expects them all to survive and play nice together. It’s turned out to be way more brutal than DayZ, and way less sinister. MineZ is like a horror film set in a ball pit.

It’s got a hunger bar that depletes so rapidly as to turn most survival adventures into manic Supermarket Sweep scoff-dashes. Most of the other players – and you see a lot of them, MineZ isn’t a lonely game – are selfish, maligned greedbags who’ll attack on sight. The community has quietly agreed on a kill or be killed mentality, probably inspired by vanishing resources and shorter lifespans, which makes MineZ a wonderfully stressful, brilliantly frustrating experience.

Just like in DayZ, your character is saved on a central server, meaning you can jump around different servers while maintaining your persistent inventory and progress. You’re also spawned on the hand-built map’s southern coastline, with a single bandage, an Ender Eye (which allows for global chat), a refillable bottle of water and a wooden sword. Everything else you must procure by scavenging, killing other players and exploring the few settlements scattered about the world. That said, there aren’t many buildings in MineZ, and unlike in DayZ zombie hordes don’t seem to prefer hanging around settlements. Instead they’re spread throughout the countryside, and appear as fast moving, smarter versions of basic Minecraft zombies. They’re fractionally slower than MineZ’s sprint speed, meaning you can outrun a zombie at the risk of noisily attracting more. Safely escaping them requires breaking their line of sight too, and they’ll investigate your last known location when attempting to hunt you. They can also bite and infect you with a slow-acting poison for which milk is the cure. Food, potions and magic milk can be found in chests inside buildings along the coast, while better gear: stronger armour, bows and arrows tend to be placed inland.

The tricky thing is, pushing inland in MineZ requires a degree of preparation. Away from the map’s main river, water becomes scarce. Settlements tend to attract other players too, and the further inland you go the greater the chance that these bandits will be equipped with dangerous bows. Killing six players in MineZ earns you a temporary red flag above your head, a warning to other players that you’re a malicious ne’er-do-well, but this resets with each game. Trust among strangers is a rare commodity in MineZ, even rarer than in DayZ. I haven’t survived nearly long enough in MineZ to see a crafting table, but they do exist, with the best food only available through combining ingredients you procure in the wild. Personal chests exist too, meaning groups of players can and do band together to form well-equipped strongholds, from which they launch expeditions to the north in order to explore and resupply. There are even military storerooms that require you to build and correctly place levers and buttons before you can access them. I’ve been too busy starving to death on the beach to get anywhere near to the cool stuff. MineZ doesn’t require a download, just connect to one of the public servers listed on MineZ.net to play. The mod officially launches in a few weeks, with a range of expensive looking premium options available too ($100 for lifetime access to private servers? Herrmmm). At the moment, I’d say the map doesn’t seem quite tuned enough to support a roaming community of 150 murderous players. The world is smaller than DayZ’s, yet the paltry draw distance on public servers (it’s half that of private servers) means you’ll spend longer wandering before coming across anything of interest. MineZ’s wilderness and thimble-sized tummies are perhaps too brutal in their current state, though updates are promised to arrive thickly and quickly.