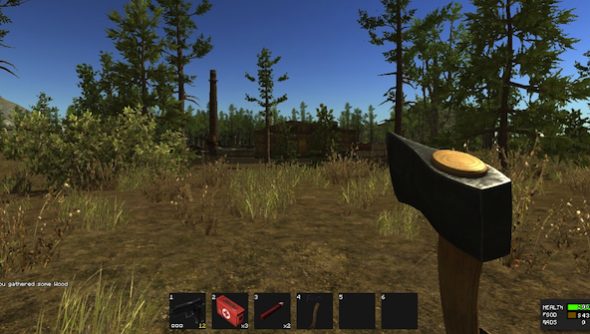 That dude Garry, who made Garry’s Mod that we all know and love, has now put his team’s new open world multiplayer survival game Rust up for alpha testing on his site. It is currently about zombies but HANG ON COME BACK it might be good.

Rust is about madly swinging a hatchet at trees and zombie faces in a concerted attempt to not die, whilst collecting, crafting, and eating things you find. Starting off, you have two medkits, three flares and your trusty hatchet, and you can attack people or chickens with that hatchet, or you can kill those pesky trees for resources. Flares are there to light your way – but other players can see you when you use them, and in a survival game that might not be the best idea. It’s sort of like DayZ meets Minecraft, only you can sometimes have a big red Ferrari according to early screenshots.

Also you can get irradiated in this post apocalyptic world, so make sure you bring your geiger counter and keep an eye out for how many eyes you have. Looking in the wiki, the post-apocalyptic world will also include granola bars, a thing that I am not sure I’d eat even if I was irradiated, dying, and had a hatchet lodged in my leg.

Garry Newman said, “We haven’t released an update for a while. A long while. Because we decided that we didn’t want it just to be DayZ – which is what it was looking like. We knew we couldn’t build big dense cities. We wanted to change direction and have the players build the world. We also hate zombies and are going to replace them with other NPCs at some point.”

You watch your talk about zombies. Everyone is listening, Garry, and we have been buying zombie games ceaselessly since we discovered that it’s a recession and Dawn of the Dead has suddenly become pertinent again.

In any case, it’s now been opened up for you to try out here – when it asks you for a code just type in numbers until it lets you go to the next page. What’s certain is that even in its current buggy alpha state this game couldn’t be worse than Dead Island: Riptide, a game that I’d rather eat my own underwear drawer than play again.