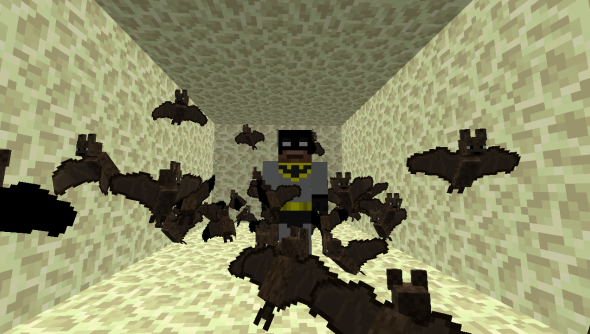 As well as introducing the witches that we mentioned the other day, the latest Minecraft snapshot features another suitably spooky mob.

Bats can be found in caves and, like most monsters, they become active at night. You’ve nothing to fear from them as they’re passive mobs who will fly away when you get close and, at the moment, they don’t drop anything when killed. They can form some pretty impressive clouds, mind.

If you want to try out the new snapshot (here’s a link to our instructions on how) then you’ll also notice the entire game sounds quite different. There are new sounds for most of the mobs, for many of your tools, for water and even for footsteps. Watch out for those witches, mind. They use an awful lot of potions.

Credit to amazingboy97 on reddit for the Batman tribute screenshot.