As I clicked my way onto Jens ‘Jeb’ Bergensten’s latest blog post on biomes, I mused idly about Minecraft’s viney jungles, the last drastically new environment I remember being added to the game. Turns out that was the last new biome of any kind, introduced in March 2012. Nothing particularly exciting has happened to the world generator since. That’s to change, though. All at once, in the near future.

“One reason why we rarely do changes to the world generator is because every little change offsets the world seed and causes noticeable borders between new and old terrain,” explains Jeb.

“A lot of people don’t mind about these borders, but we still want to avoid creating them. So, in order to avoid needing to change the world generator again in the nearest future, we try to do as many changes now as possible.”

That means a splurge of new biome creation rules are coming to Minecraft.

Biomes will be newly divided into four categories: snow-covered, cold, medium, and dry/warm – divisions that sounds totally nonsensical and indistinct to me, but will reportedly see that biome types gradate more naturally into each other, avoiding the desert/tundra dichotomies sometimes seen while a-wandering.

Overlarge oceans will be kept in check by, um, checks, as well as a greater frequency of islands, and existing terrain will be augmented by new varieties of flora. Best of all, though, is the promise of a “whole bunch” of entirely new environments, most of which boast their own rarely-occurring variations.

Here’s what the results look like so far, from very, very far away: 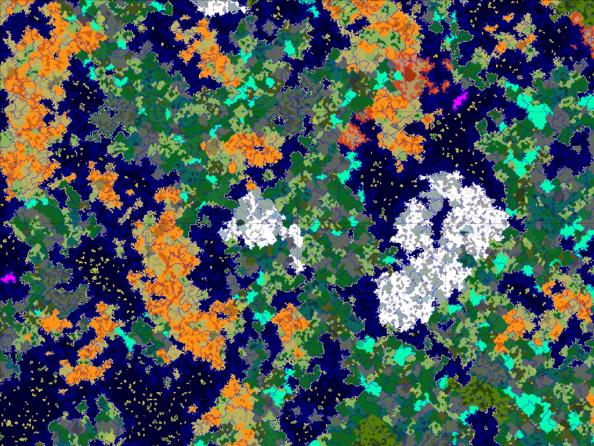 I’m getting a last night’s dinner vibe. What sort of blockscapes would you like to come across on your next sojourn in Minecraft? Volcanos, natch, but what next?