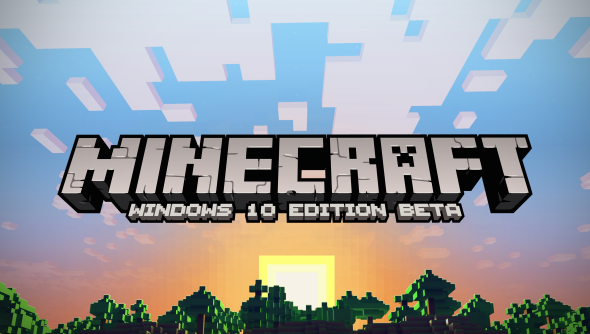 At this year’s Minecon, Microsoft have announced the next version of Mojang’s cult block classic: Minecraft: Windows 10 Edition. As the name suggests, the game is built with Windows 10 in mind, and will take advantage of many new features that the new OS brings.

Also, all current PC owners will receive a free copy of the new edition, and the beta starts on July 29th.

Earlier this week, Mojang announced that over 20 million copies of Minecraft on PC have been sold, and now every one of those players are eligible to upgrade to Minecraft: Windows 10 Edition for free. New players will need to pay $10 if they want to purchase access to the game and the beta, which launches on July 29th.

While the new edition is planned to add many new features to Minecraft, as well as porting in existing ones from the current game, Mojang have said that the Windows 10 Edition will not replace the existing game. Instead, both versions of the game will be equally supported going forward.

After Microsoft bought out Mojang for a smooth $2.5 billion last year, it’s not surprising for Microsoft to increase the incentive for their brand new flagship Windows OS. To find out more about Minecraft: Windows 10 Edition, you can hop over to Mojang’s blog.

In other Minecraft news, Telltale have shown off a trailer for their episodic adventure series: Minecraft: Story Mode.