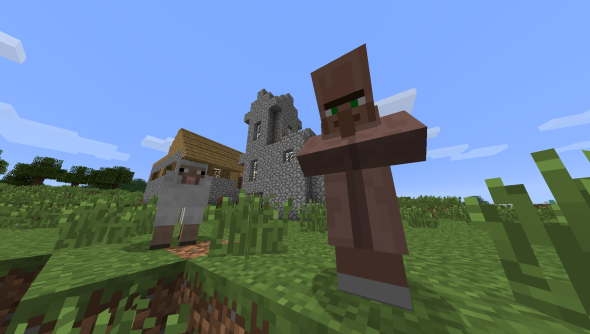 Those brave souls willing to delve into the pre-release snapshot of Minecraft’s weekly builds have been reporting on some major upgrades coming. The main changes  we can expect on the salmon pink horizon are currency and an ancient Egyptian influence.
Snapshot 12w21b is probably the most significant update to Minecraft since the inclusion of villages and villagers. It gives the denizens a purpose in the world, above making you feel less lonely in single-player: now each villager has a dialogue that you get when you right -click, and this is what it looks like.

What it is: on the left is what they want; the right is what you’ll get. It’s not an economy, really: it’s a pot-luck way of being able to get easier access to a few items. Each villager has one thing they sell in an unlimited supply, and as long as you can match the price it’s yours. There’s talk of a currency, which I’ve yet to experience: most of them want to trade in Emeralds with me, either as the commodity or the currency. Emeralds are a new block, the first that’s been added in a long time.
Currently things seem to be randomly priced: 19 wheat for one emerald is actually a decent price, as another of the Testificates wanted one Emerald for a diamond pickaxe. Those adventurers willing to wander and collect will probably find it an interesting system, if frustratingly randomised: at least there’s a chance you’ll be able to grab something. To make things a bit easier, seed -713140688438019462, will spawn you near a village and a short walk away from a desert biome containing a pyramid.
Yup, I just casually dropped a pyramid in the text. The new building a sort of reward, as it always contains four chests for you to, er, excavate? There’s no labyrinth, either: you just head to the main room and find the blue block: beneath it is a deep chamber with the four chests for you to loot. What it does throw at you is the small trouble of a lot of TNT sitting right under neath the room: if you step on the grey pressure plate in the centre of the chamber, everything will explode: you’ll lose the chests and your life. Please, spelunk safely.

Now you have all that loot, there are easier ways to keep and sort it as well. Ender chests are magic boxes made from a square of obsidian with an ender eye inside. The chest it creates will be linked to all other chests of the same type, so each ender chest contains the same inventory wherever you are. A good way of sharing resources between players if one’s off gathering and another’s at home building.
The final tweak worth talking about is to the inventory: it’s now categorised with tabs enabling easier navigation if you have a packed, messy backpack. But you can even search within the items by simply typing, so “t” will show you every item with that letter, and “torch” will display redstone and ordinary torches. It’s the first functional inventory change for quite a while, but it’s been sorely needed.