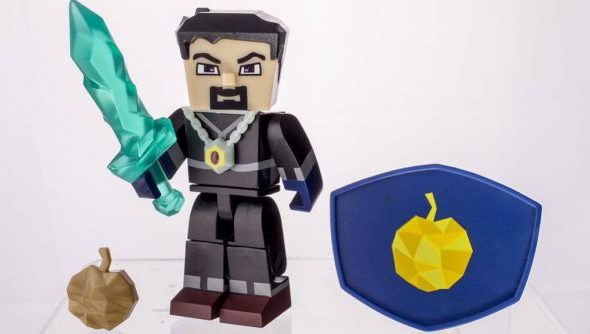 Minecraft merchandise is its own industry. A year and a half ago, the Minecraft annual outsold One Direction’s rival tome – and in July we learned that Mojang’s licensed and unlicensed book babies were giving the children’s print market a much-needed boost.

Now, Minecraft is more than big enough to claim its own section of Toys R Us. And in that section, there’s a subsection, in which you’ll find blocky model YouTubers.

The range is called Tube Heroes. It doesn’t officially launch until May 22nd, but packs are already appearing in some stores in the US.

It makes business sense: for many pre-teens, the guides they follow into Notch’s world on YouTube are as important a part of their lives as the game itself. Why would they want a physical manifestation of generic old Steve, when they could wave a tangible CaptainSparklez about the house instead?

The opening lineup includes Sparklez, AntVenom, ExplodingTNT and AshleyMarieeGaming – names that might not all be familiar to you and I, but who command audiences of actual millions through a mixture of parody songs, adventure mod playthroughs and, in AntVenom’s case, Cribs-style house tours.

Naturally, online toy reviewers have begun previewing the new range. That’s right: the tube now goes all the way around to form an amateur broadcasting ouroboros. Skip to 2:30 for the Heroes.

Let’s talk YouTubers. Do you have a favourite? I am a fan of patient Blood Bowler cKnoor.