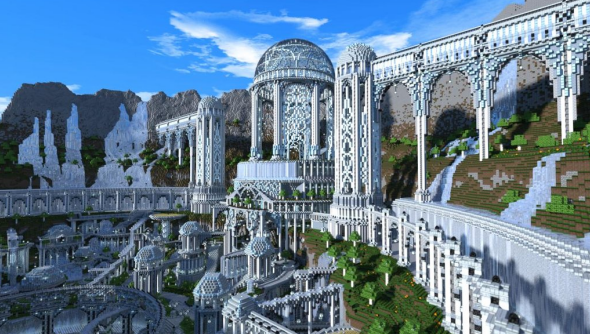 The Minecraft community is an extraordinary thing and we get to see impressive, imaginative builds every. Then, once in a blue moon, something truly extraordinary comes along, something that sends us reeling with its scale and its style. The city of Adamantis is just such a build, a gorgeous, enormous, elaborate and multi-tiered creation that’s more like a palace than anything else.

What’s more, it’s the work of just one person and, much as Rome wasn’t built in a day, Adamantis didn’t come quickly. It took creator jamdelaney1 three months to complete, during which some sixty million blocks were laid down. Sixty million. Click through to see more images, a video and to just, y’know, be amazed. This is a city with sweeping colonnades, enormous, towering domes, great frothing fountains and smooth, shining plazas. The entrance is impressive enough, with its great columns stretching up behind two wide reflecting pools, but once you step through one of the biggest sets of double doors that you’ve ever seen you realise how it’s much larger than you first realised. Waterfalls and staircases cascade down from the hills beyond and, while towers reach up to the skies. Actually, you know what? Enough talk, I should just show you the whole thing. Here’s an all-too-short overview of the city.

If that’s not enough for you, you can download the whole thing here and its creator has posted several other pictures up on imgur. Way to inspire everyone this Friday jamdelaney1. I bet ten thousand players have had their imaginations set alight already.