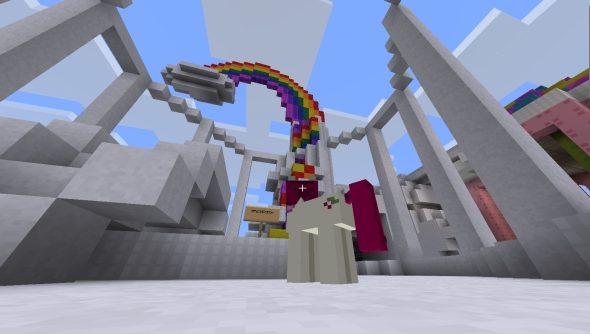 I am not a Brony. I don’t enjoy the resurgence of My Little Pony, but neigh do I mind that others do. I’ve yet to watch an episode. In fact, all I know about MLP is the childish nursery rhyme that starts “My Little Pony, so skinny and bony…” So obviously I am the perfect person to enter a themed Minecraft server full of rainbows and flying horses with over-large eyes.

It’s important to know that the mod installer looks like this. It’s playing music that plinks and plunks, so I’m already on edge. I’m worried about a diabetic reaction to the Brohoof server’s recreation of Equestria. And I’m terrified that I’ll put my hoof in it, and be marked out as an outsider, incapable of understanding the most basic equestrian etiquette. They talk about making it as close to canon as they can, for Glob*’s sake.


And yet I enter. I’m running the Brony Mod Pack and it’s dumped a number of things into Minecraft that makes my transition from biped to quadruped easy: a new, brightly coloured MLP texture pack called “Love & Tolerance” that’s as much of a riot of primary colours that you’d expect from the name, some builder mods that won’t really affect me, and a flying mod. But most of all there’s a new player model. One that turns me into a pony. What it hasn’t done, because it’s incapable of it, is change my player skin, so when I eventually log into the Brohoof server, a single click from my now ponified Minecraft menu, I have the 11th Doctor, Matt Smith, in pony form. This is the dream of many a MLP and Doctor Who slash fiction writer, but I just feel queasy. I’m also a lot more cloppy than usual.
The Brohoof server knows it’ll entice tourists. The first thing you see is a sign telling you are somewhere you’ve never been before, and the second is a selection: the right takes you out into Equestria if you’re a Brony and want to stay a while; the left to the Cloudhhub, a helpful selection of warps to the sights of the world. I take the left. I am a guest. A Tourony. I warp to the clouds: first impressions? Bronies know how to build. Up there there’s a tethered series of airships. I can see a rainbow. Is it called a rainbow in MLP? I’d suggest “bownie”, if it’s yet to be claimed. I’m joined by a player called ‘Distorted’, who could smell the noob on me from two towns over: he shows me how to fly and how to use the Cloudhub, which is a series of rooms that will take me to the sights of the world. Do I want to see “Ponyville”, or “Canterlot”. I’m told that “Manehattan” is impressive, and warp to there.

I’m impressed. It’s like a, well, a slightly ponified version of New York: the buildings are all New Yorky, but colourful. I want to take to the sky, to see the rooftops disappear into the clouds. To fly I have, so help me, a magic rainbow coloured feather that I activate. Clop clop clop, hoof! I’m joined in the air by Distorted, and can see his wings flapping over central park. Manhattan goes on and on: it would be an impressive sight on any server. I’m slightly ashamed that I’m more impressed because it’s been built by My Little Pony fans. It’s a well made city, without an overwhelmingly horseybent: it’s just a colourful, pretty build. I return to the cloudhub and head to “Canterlot”. This is more of what you have in mind when someone says to you: “Hey, my editor has my family and won’t release them until I’ve investigated a My Little Pony Themed Minecraft mod”. Colourful castles, rainbows. If you somehow managed to cover yourself in syrup and run through the Tutti Frutti factory, what would emerge at the other end would resemble the colour scheme here. I wander the coloured halls and discover a throne room that tells you where to stand when in an audience. I’m so overwhelmed by colour that I forget to ask just what it is the people do on the server. I didn’t witness any role-playing, although someone did say “Alicorns are disgusting”, which upset another player; it could have been a really nasty diss, like “Mudblood”**. There’s probably some role-playing going on somewhere, but all this world is so far is a work-in-progress. It’s the fourth Equestria the community has built, trying to keep up with the show’s canon.
Just as I was wandering the server’s version of Las Vegas, a place that manages to feel toned down in the Pony world, it crashed and I’ve been unable to return. I was given the message: “End of the magic stream”. I’m glad you can visit without being expected to know the My Little Lorey. I did. I ventured in and made it back without feeling like I needed a tail. It’s an impressive sight, one worth visiting if you have any interest in what communities you might never have experienced can build.

* I am, however, an Adventure Time fan.** And I also like Harry Potter.