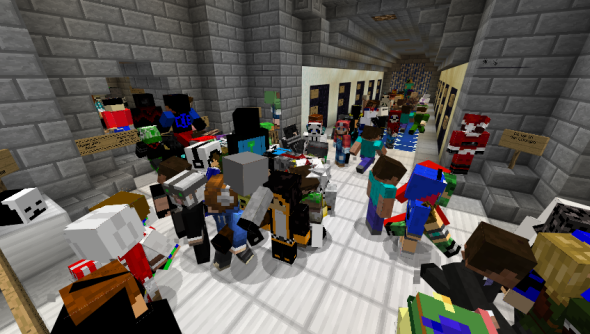 Two very smart developers, going by the reddit handles HighlifeTTU and lazertester, have put their heads together to come up with a way of connecting different Minecraft servers through a single, central lobby, from which players can select where they want to travel to. It looks and behaves exactly like a starting lobby in any MMO and its developers reckon that it can support “any number of servers and pretty much any number of players.” Here’s how this new transdimensional travel works.

The lobby functions as a miniature Minecraft level, connecting different servers together, allowing players to walk through portals that will take them to to those servers. A small lobby like this allows players to meet before joining servers and work out where they want to head, or simply work out plans for their playing. It also doesn’t put very much strain on the server hosting it, as it doesn’t demand a the repeated loading or unloading of chunks.

For those who prefer a quick roundup of their connection options, there’s also a message board that displays the various servers available and their current membership. Right-clicking on any of these server signs will also take you to the server. Lobby signs can also display information specific to each player, allowing for you to see information directly related to you whenever you log in. Were you banned from a server? The lobby can tell you why.

Connections to the lobby can also work in both directions, allowing players to connect back to the central lobby from a server, also by right-clicking a similar sign. This will either return them to the lobby instantly or, if the server admin prefers, first impose a short delay. The lobby contains social spaces like a lounge, a swimming area and even a dance floor. I’m not really sure what dancing looks like and I don’t know if I want to find out.

Even outside of the social and co-operative improvements this presents, it could save a lot of connection hassles. It’s certainly much easier for a player to look at a server list and see a single lobby with X free spaces available rather than scroll through and repeatedly refresh a list of what could be dozens of servers. If you’d like to read more about this remarkable (and potentially revolutionary) mode, you can find the creator’s description, along with some extra screenshots, here. The pair are also answering questions on this reddit thread.