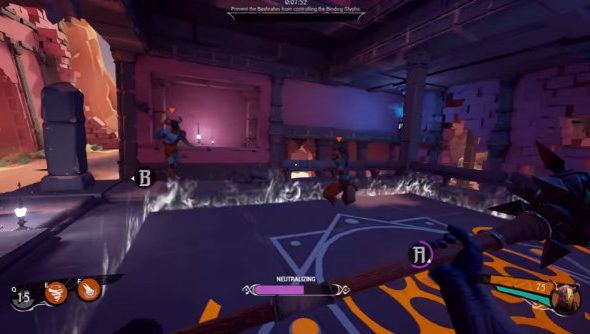 Torn Banner, creators of Chivalry: Medieval Warfare, have shown off some more of Mirage: Arcane Warfare at this year’s E3.

Coincidentally, it looks just like Chivalry, but with a brighter colour-palette for readability – what with all those spells going off – and with magic flying all about the place.

Just because it has colour, it doesn’t mean it shies away from brutality, however. It’s as gory as Chivalry, and there’s still a very strong focus on melee encounters. At one point in the gameplay trailer, the player in control takes a mace to a downed enemy and the results aren’t pretty.

It’s definitely a shift after Chivalry, though, and looks like an attempt to try capture the imaginations of some of the MOBA crowd. If you’re not into it, Chivalry still exists and is very much still enjoyable to play. Personally, I want to give it a go before I judge. It could be a lot of fun.

In the meantime, cast your eyes over this footage: