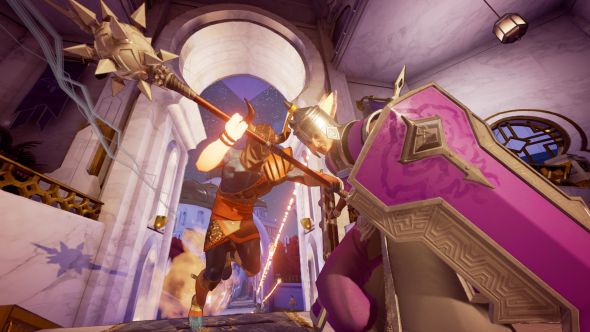 In a grisly trailer full of enthusiastic screams, Torn Banner Studios reveal the Taurant, one of the character classes in their forthcoming magic-flavoured melee brawler Mirage: Arcane Warfare.

Prefer your violence with company? Check out the best multiplayer games on PC here.

The Taurant is an hilariously psychopathic melee-focused brute, who runs around shouting things like “being strong is never wrong!” while wearing a bullhorned helmet. In the trailer, he’s shown tenderising enemies with polearms and a variety of nasty spells: he can conjure a spiked boulder and throw it at people, disable enemies even if they’re parrying with an explosive punch or charge, or leap into the air and slam the ground. Results include decapitation and gargling screams straight from the Karate Girl school of ham acting.

That’s not accidental, by the way; those screams are a point of pride for developers Torn Banner Studios. Head to the Mirage websiteto play the dying screams of each of the game’s classes and to sign up for the beta, which is due later this year.

It’s clear that the addition of arcane ingredients has given Torn Banner plenty of space to unleash their imagination for their follow-up to their successful debut, Chivalry: Medieval Warfare. As fun as Chivalry was, gameplay in Mirage looks much more varied and there’s a nice pastel shade to the visual style.

Check out the first class trailer – for the Vypress – here, and follow our coverage of Mirage for more information. After the beta, the game itself is also scheduled to launch before the year is done.