Bird’s eye view: all the holistic insight of the winged kings, without the constant fear of predator attack from absolutely any angle. Monaco creator Andy Schatz has stuck with his favoured perspective for his next project – a streamlined C&C style RTS named Armada.

“With Monaco, we took an old school genre (Stealth), we simplified the controls, and then we built an incredibly complex game that could be played at high and low skill levels alike,” said Schatz. “I want to do the same with the real-time strategy genre.”

“Maybe it’s just nostalgia speaking, but I want to play an RTS game that feels like a battle of wits, not a battle of clicks,” Schatz continued in a blog post. “I want to compete at a high level, but I also want to be able to introduce the RTS genre to my friends at a party. I want an RTS where the strategy is creative and complex and the micro is accessible and fun.”

It’s C&C, StarCraft and WarCraft that Schatz has looked to for the raw materials of his new game. He wants to retain the genre thrill of repelling a horde of enemies with perfectly placed Tesla Coils, or outsmarting an enemy with Reapers at the back of his base – but strip away the complexity of micromanagement.

It’s got to be so simple it can be happily controlled with a gamepad – while “emotionally and intellectually” feeling like StarCraft 2 to play.

“With apologies to those devs who have tried, no one has ever made an RTS that played well on a dual analog gamepad,” said Schatz. “We’re gonna be the first to do it right.” 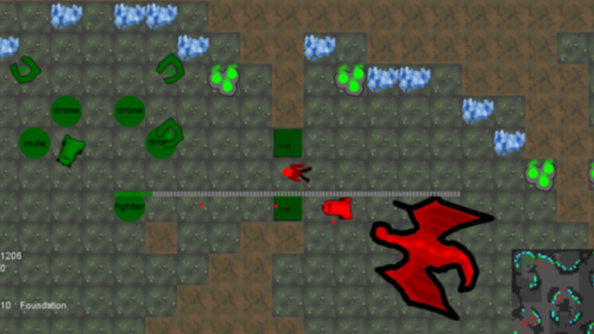 Unit orders are the “first casualty” of this philosophy – replaced by a directly-controlled Champion who builds structures and leads AI units into battle. The units who remain will either automatically defend the nearest spawnpoint or harvest resources.

Combat will be handled in rock-paper-scissors fashion – an angry triangle of attack, defence and economy.

“If you rush, someone who turtles wins,” explained Schatz. “If you turtle, the person who fast expands wins. If you fast expand, you are vulnerable to attack. In practice, RTS games are much more complicated than this, but the initial strategic directions can usually be boiled down to those three choices.”

There’s no release date for Armada – Schatz doesn’t know if it’ll be a six-week project like Monaco was intended to be, or a three-year development cycle like Monaco eventually had. Will you be listening out for when he next touches base, as it were?