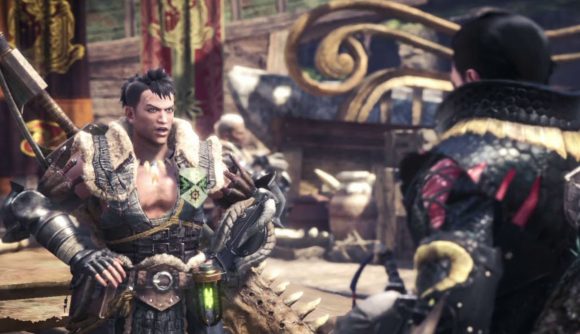 Update, November 21: A new set photo from the Monster Hunter movie shows off something much closer to the source material.

It’s probably safe to say that the first bunch of photos from the set of the upcoming Monster Hunter movie didn’t make it look like the film would be sticking particularly close to the source material. In those shots, actress Milla Jovovich and her co-stars could be seen in modern military dress, with barely a bone-tooth necklace in sight.

Thankfully, it seems that initially fears about the direction the movie would take are (at least partially) unfounded. A new photo appeared today (via IGN) showing Jovovich alongside Thai stuntman and martial artist Tony Jaa. While Jovovich has abandoned her modern military dress for something a little more tribal, it’s Jaa’s outfit that’s drawing attention.

Jaa’s look is clearly modelled after the Field Team Leader from Monster Hunter: World. As well as the enormous Giant Jawblade sword in his right hand, Jaa’s character is also wielding a Great Hunter’s Bow, and his costume is covered in monster teeth, fur, and leathers.

Jovovich, who has also starred in the Resident Evil films, posted the first wave of set photos to her Instagram account. You can check out the new photos, featuring Jovovich and Jaa, in the image below.

In one of those you can see her wielding a Slinger which is straight out of the Monster Hunter games. Jovovich had already mentioned that “all the armor and bone blades are gonna be in the movie too, it will all make sense when you see it,” but it’s nice to see those things as they’ll actually appear in the film.

Captain Natalie Artemis. Ranger. Monster Hunter. Just a little peek for all the @monsterhunterworld fans out there who were worried the other day.😉 Here is Captain Artemis wearing a “slinger” on her arm. I will also post a pic at some point of some of the incredible MH weapons we’ve recreated for the film.👊🏼 #monsterhuntermovie #monsterhunterworld #tankwadiary

You can also see Jovovich posing with co-stars Megan Good, Diego Boneta, T.I. and Jin Au-Yeung. No sign of Ron Perlman aka Hellboy, though, who has been confirmed to be part of the cast too.

Happy Halloween from Alpha Team, not in costume this year but in UNIFORM! We didn’t get to go trick or treating but it’s a real treat to work with these incredible people on #monsterhuntermovie @meagangood @diego @iammcjin

Alpha Team between takes. So much fun hanging with these two, the gorgeous and super talented @meagangood and the one and only @troubleman31. The days are long and exhausting out here in the desert, but it’s so worth it and we really feel like a close knit team now. 📷@giftedtalents p.s. for fans of the game, all the armor and bone blades are gonna be in the movie too, it will all make sense when you see it!😉 #monsterhuntermovie #monsterhunterworld #cederbergdiary

The Monster Hunter movie is due to come out in 2020 so we’ve got a while to wait yet to see an Anjanath prancing around on the big screen.