Monster Hunter is a series about exactly what it says on the tin: tracking and killing big beasties in a fantastical land. This is obvious from the first moments you spend with Monster Hunter: World. Before you lies a densely detailed ecosystem, full of snarling life, herbivores snacking in the open while a pair of hungry eyes watch on from behind a leafy canopy. Wait a second and you could witness carnage as a Great Jagras waddles out to gobble its prey whole, before being interrupted by a Rathalos that was flying overhead, the pair of titans then duking it out with all the hisses and yelps of a real animal scrap as they tear down the forest around them.

Unlike previous games in the series, the wildland of Monster Hunter: World isn’t just a stage for boss fights; it’s a hunting ground, a forager’s paradise, a place to go fishing, it’s even home to a tribe of righteous Felynes. And this is only the starting area, the Ancient Forest – beyond that are the pinks and pale blues of the Coral Highlands, the grim mud bogs of the Rotten Vale, and Wildspire Waste’s scorched desert. Capcom does well to deliver the sense of a world that’s promised in its game’s title.

Specifically, this is the ‘New World’, which is a previously unseen region of the Monster Hunter universe. It’s a break away from the console-only games and the places they explored before, which puts first-time players – of which there should be many on PC – on more of a level playing field with series veterans.

In the story, this new land is explained away as being the migratory destination of the most powerful monsters, and as a member of the Fifth Fleet, it’s your job to research what’s going on there. That’s what you’re told, at least, the reality is that you’re going to slay these creatures in spectacular showdowns, maybe capture a few and bring them back to fight each other in an arena. 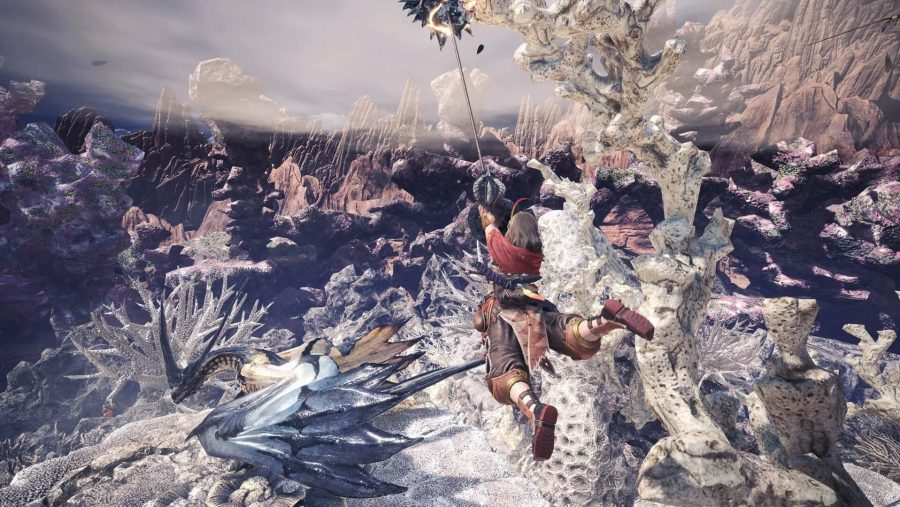 There’s certainly room to discuss the lighthearted violence of Monster Hunter: World. At its centre is a peculiar interplay: it expects you to learn food chains, to figure out which herbs to pick and when to use them, and the campaign’s story is concerned with upholding the fragile cycle of nature. But then it celebrates slaughter of its creatures with trumpet fanfare and rewards you with cute outfits to craft out of your quarry’s scaly hide. Monster Hunter: World doesn’t recognise any contradiction here – for better or worse, this isn’t a game interested in discussing morality. But don’t let that stop you from feeling a tad guilty when you beat a monster so bad it whines and limps back to its nest to recover, where you’re expected to finish it off.

New to the hunt?

If you're new to Monster Hunter: World then let us give you a hand with our guide to weapon choice, combat, foraging, exploring, and upgrading armour in those first few hours.

Turmoil likely won’t sit with you long, however, as Monster Hunter: World will quickly seduce you with the thrill of the virtual hunt. This starts with tracking a monster using the new ‘scout flies’, glowing bugs that highlight important clues in the environment for you to investigate – fresh saliva draped over a rock, claw prints in the mud, and scratch marks in bark. Once you’ve collected enough evidence of a nearby monster the flies will give you a direct trail to your target.

It’s then that you’ll get into the real meat of the game. Where Monster Hunter truly excels is in the challenge and variety of its combat. For the most part, it’s hefty, with sword swings needing a lengthy wind up, the weight of lifting a club delaying the execution instructed by your button press. 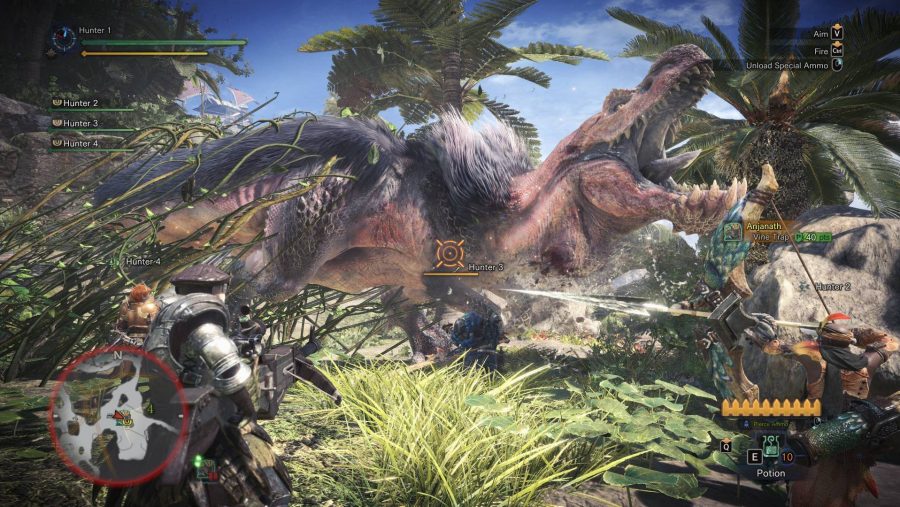 It can take some getting used to as you work out the glacial rhythms of the giant weapons and try to find gaps in a beast’s rapid attacks with which to plug with a smack to the skull. There are a few exceptions, though, found in the swift dual blades and acrobatic insect glaive, but mostly you’re dealing with massive swords, lances, and hammers – how else do you expect to knock an Anjanath on its arse?

It can take some getting used to as you work out the glacial rhythms of the giant weapons and try to find gaps in a beast’s rapid attacks with which to plug with a smack to the skull. There are a few exceptions, though, found in the swift dual blades and acrobatic insect glaive, but mostly you’re dealing with massive swords, lances, and hammers – how else do you expect to knock an Anjanath on its arse?

Even the ranged weapons pack a punch as they turn Monster Hunter: World into a surprisingly capable third-person shooter. It’d be easy for this spread of weapons to feel like padding, but it’s far from: each weapon has its own novelty mechanic for you to master, which can completely change how the game plays. Having spent hours with the mighty charge blade and the liberating insect glaive on console, swapping over to the bow has transformed the game for me once again. No other game I’ve played has managed to make its range of weapons so distinct from each other. 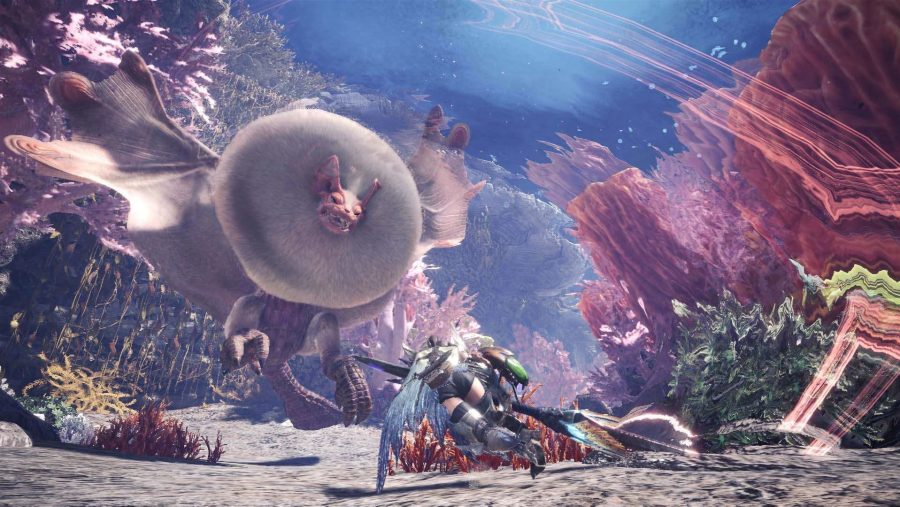 This spread of deadly tools works even better when you bring in friends to play online co-op. You’ll want to put together a crack team – not just those who know every monster’s weakness, but those who are experts of different weapon types. It’s no good having four great swords charging in; you need someone with a hunting horn so they can provide buffs, and maybe someone who can stand back and group heal. For this reason it’s best to specialise in a particular weapon and to get to know its nuances rather than try to spread your expertise across the entire arsenal.

Put together the right group, get practising, and you’ll soon discover the intoxicating pursuit that is defeating endgame monsters. That’s how I like to spend my evenings. It might take several tries, but the moment an hour-long battle with a ferocious dragon ends in victory you’ll discover a satisfaction that few games can match. If there’s anything Monster Hunter: World does right it’s turning each hunt into an entire adventure in its own right.

Games revel in having us kill mobs of enemies, but Monster Hunter proves that being pitted against a single, tough opponent can provide far more drama. And what beguiling opponents they are: severe electrical flying lizards, skin-ripped blood dogs, majestic chrome dragons, and even a puff-necked balloon bat. I still grin as I square off against each member of this extraordinary cast. 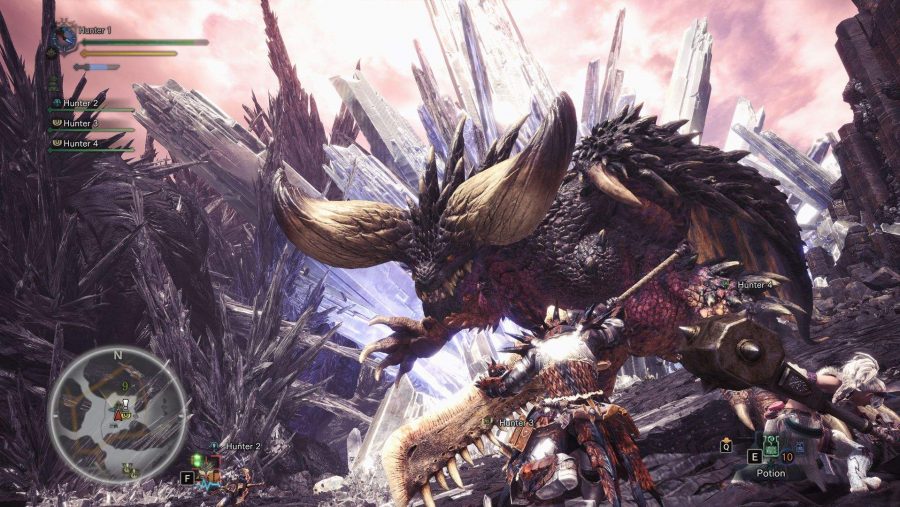 With each successful hunt you’re going to be turning these beasts into armour and weapons. It’s this that also creates the game’s near-perfect loop of preparation, hunting, and upgrading. However, while the net result of this is satisfying, it does mean spending a lot of time between hunts lost in a sea of menus and upgrade trees. You’ll learn them in time, and really there’s no rush, but they’re not as intuitive as they could be and there’s probably far too many. What all the options in these menus do offer, though, is lots of customisation, and not just to your appearance but also to how you progress through Monster Hunter: World.

The main quest splits the game into two handy sections. There’s ‘low rank’, where the quests are more guided, giving you freedom but always being clear about what’s expected of you. Whereas ‘high rank’ sets you loose on the game’s tougher challenges and lets you choose all your own goals. You’ll be spending the majority of your time with the game here, but ‘low rank’ is worth returning to if, like me, you enjoy helping new players. There’s something invigorating about returning to the early game as a grizzled veteran to show newcomers the ropes. More games would do well to allow this kind of interaction between its players as it benefits everybody.

It’s due to the freedoms Monster Hunter: World offers that I am happily putting more time into it after playing for well over two hundred hours on console. That speaks volumes for how rich the whole experience is. The biggest differences with this PC version are a few minor quality of life changes and a significant graphical upgrade. It’s not night and day exactly, but faster load times and better draw distance make it an absolute treat, so long as you have hardware that can handle it.

Monster Hunter: World is one of the finest action-RPGs ever made and a rich co-op title that's only made better with the PC version's technical improvements.