Part of what makes Monster Hunter: World great is its flexibility. Each weapon type, though vastly different from one another, is equally viable. But to truly maximise your damage output it’s important to shape your character build around each weapon’s strengths. For example, faster attacking weapons don’t benefit from the armour skill Focus, and it wouldn’t make much sense to put a blast attack jewel into a poison weapon.

Just interested in the swords and gunlances? Read our guide to Monster Hunter: World weapons.

That said, there are many ways to load out your hunter, and this guide is by no means exhaustive. A big part of the game is experimenting with different armour and weapon combinations, but we’ve put together this list of five builds in case you need some direction. These builds use late-game gear and often require Elder Dragon hunting, so if nothing else they can offer a roadmap for newer players when Monster Hunter: World eventually releases on PC. 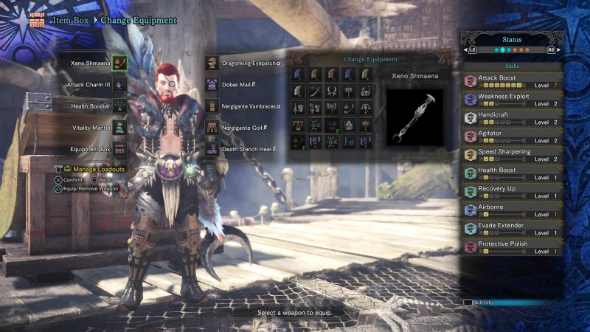 The insect glaive is one of Monster Hunter: World’s flashier weapons as it often lets you fly around the arena above your target’s head. One of the glaive’s downfalls, however, is that its quick attack speed eats through sharpness very fast. The goal of this build is to stay at max sharpness as long as possible.

The Odogaron armour set bonus is something called Odogaron Power, which provides the skill Protective Polish. With Protective Polish active, your sharpness meter will not decrease for a short time after sharpening your weapon. Paired with a weapon with white sharpness, this skill can ensure a steady output of high damage. This build also provides a few points of the Speed Sharpening skill which pairs well with Protective Polish. The rest is rounded out by Weakness Exploit and Attack Boost.

If you’re lucky enough to pick up the Sharp Jewel 2, which provides the Protective Polish skill without committing to four pieces of Odogaron armour, feel free to focus your build on Attack Boost and Weakness Exploit, as pictured. Paired with the positive affinity of the Xeno Shmaena glaive, you’ll notice massive critical damage. 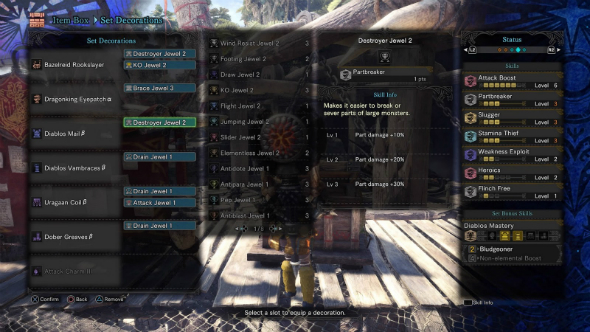 One of the more complicated weapons in Monster Hunter: World, the hunting horn provides loads of utility in the form of musical buffs that the entire party can benefit from. Doing its best hammer impression, this horn build is as good at knocking monsters out as it is buffing allies thanks to the Diablos armour set bonus. With this setup you’ll also see generous returns from the Attack Boost skill.

Slot in some KO jewels and you’ll be knocking monsters out a couple times each fight. If you can’t find the the jewels you want, you can replace the Uragaan Coil for something like the Diablos Nero Coil alpha for the Partbreaker skill. Another option is to swap the Dober Greaves for the Xeno’jiva Spurs alpha to make up for the Bazelreid Rookslayer’s negative affinity. 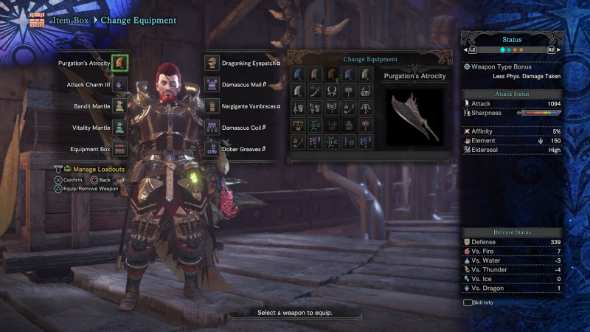 The greatsword may be slow, but what it lacks in speed it more than makes up for in raw damage. This build looks to capitalise on the already large attack stats by bolstering it with points in Attack Boost and Weakness Exploit. Focus is a must-have skill for the greatsword as it allows you to get off those precious fully-charged swings faster. This build uses the Purgation’s Atrocity sword because it’s the highest raw damage greatsword available, but other good options are Leviathan’s Fury or even the Jagras Hacker III, as long as you can find a couple of Attack Boost decorations. 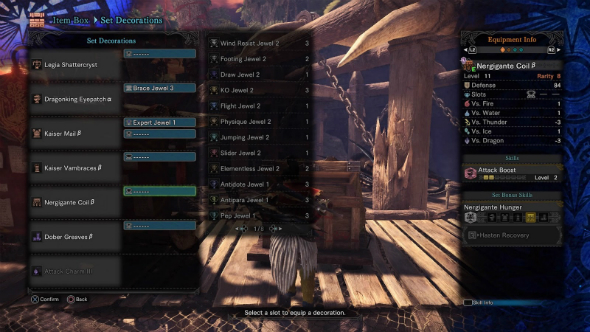 If you’re looking to put some distance between you and your target, you have three options in Monster Hunter: World – the bow, the light bowgun, and the heavy bowgun. This heavy bowgun build focuses on shots that pierce through monsters, hopefully landing multiple hits at once.

The shattercryst gun comes with positive affinity and the ability to fire pierce rounds. The Kaiser Mail provides a boost to special ammo fired by bowguns, which makes the machine gun-like Wyvernheart shots even more satisfying when unloaded into a monster’s face. This build, and most heavy bowgun builds for that matter, excel when your target is a large, long-bodied monster. Ideal targets include Diablos, Ratholos, or any monster you can hit from head to tail using the piercing ammo. Smaller and faster monsters, such as the bird wyverns, tend to be too quick for the heavy bowgun’s relatively slow speed. 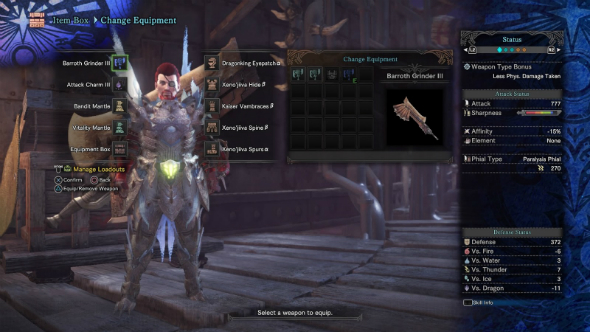 The switch axe’s phial mechanic makes it an ideal candidate for builds focused around elemental damage and status effects, and the Barroth Grinder III boasts one of the best paralysis attacks in the game. WIth a paralysis phial level of 270 and the potential to stack 300 more on top of it using a Free Element jewel means that you’ll be paralyzing the monster several times in a fight, something that your teammates will no doubt appreciate.

Another benefit of this setup is Power Prolonger from the Xeno’jiva armour set bonus which allows your weapon’s sword mode to stay active for longer. This is a simple build that benefits from experimentation; for example, you could throw a couple of attack-boosting jewels in there or maybe some part-breaking jewels depending on what monster you’re tailing.

Those are favourite Monster Hunter: World builds, go ahead and share yours in the comments section below.