There’s a weapon in Monster Hunter: World called the Steel Axe. ‘So what?’, you may think, but that horribly generic name betrays its striking design. Its colossally huge steel plates are mounted on a rail system, and at the press of a button they slide into a new configuration, transforming the weapon from an axe into a sword. The animation is satisfyingly detailed, and both forms have completely different attack animations and functions – you can tell it has been made with love. The Steel Axe would be an amazing weapon, then, if only I could get it to actually hit the terrifying rock monster that is currently whooping my butt.

Join together with some pals for the best co-op games on PC.

Monster Hunter: World is a good-looking game, no-one can deny that, but its initial shine is the smoke-and-mirror act that hides the rough combat mechanics underneath. Having spent much of last year playing countless hours of Horizon Zero Dawn on PlayStation 4 – a game also about tearing huge creatures apart – I thought I knew what to expect with Monster Hunter. I was wrong. Horizon is a slick, smooth action game, and Monster Hunter… well, its design is very Japanese, and not always to its benefit. It is clunky, often frustrating, and possesses depth capable of inflicting vertigo in new players like myself.

Monster Hunter’s beasts are dangerous and aggressive, as they should be. Each large creature acts as a boss-style encounter, demanding a rigid, limb-targeting strategy. Much of your time in combat – which is protracted and involves chasing your prey across large zones – involves evading attacks and rolling out the way. A tight balance needs to be struck between offense and defence. There are two things that get in the way of this. The first is stamina, which is a hindrance at first, but after a while becomes a welcome resource management challenge. The second problem is the way that every element of combat doesn’t quite click together. Unlike action games from studios like Platinum, your moves don’t flow and blend together smoothly. It feels as if there are distinct gaps in between everything you do. This does give the chunky weapons an appropriately hefty sense of weight, but often makes combat frustrating. 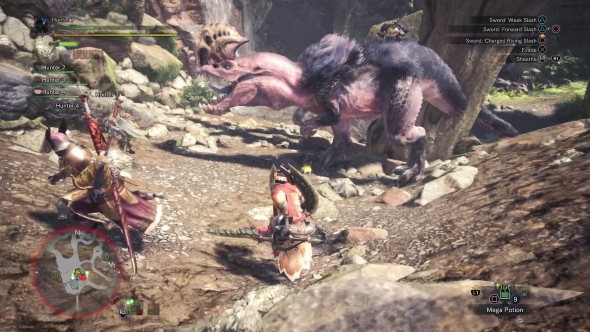 That is not to say Monster Hunter: World’s combat is bad. Rather, it is not something that anyone new to the series should expect to dive straight into without friction. While fighting my gravel-headed foe, I find myself lunging out into mid-air due to the lock-on fixing only the camera to the monster, and not my character. When I finally get into position I unleash some basic attacks that connect with the stony hide, but nothing that feels like it is doing the job. Thankfully, I finally (and wholly by accident) unleash some elemental energy stored in the sword formation of my weapon, resulting in a machine-gun-like eruption from the blade. OK, this is more like it.

By the end of my hands-on time with the game I feel like I am beginning to see the potential of its systems, even if I can’t quite get to grips with them myself. Weapons have a series of combos for you to perform, although trying to find an opening to use one can be difficult when your prey is so aggressive. It feels like combat runs at two opposing speeds: fast for the enemy, and slow and choppy for you. I don’t think Monster Hunter has rhythm – which is a shame, because it would be extraordinary were it able to match the beats of Horizon or even Bayonetta – but it does clearly have patterns. Understand how your personal equipment patterns fit into the enemy’s attacks and you will discover the sweet spot, where Monster Hunter clicks together. I personally never made it that far, but I am eager to find it. 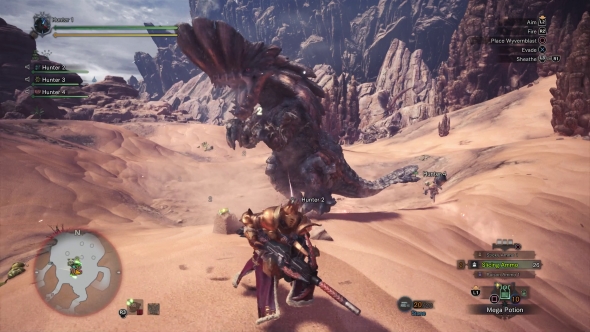 Even though I currently struggle with the combat, I cannot deny that Monster Hunter: World is an attractive proposition. For those who thrive on Japanese RPG design, the pages and pages of item crafting and customisation will be a huge pull, but for me it is the pure thrill of the hunt that appeals. A Monster Hunter mission begins on the fringes of a large zone, and you track down your target by discovering clues: a footprint here, a skidmark there, some viscous fluid smeared across a rock face as your quarry squeezed through a cavern. And upon discovering your target, the game transforms from a leisurely jog through picturesque environments into a panicked race. A race not only against time – you are on the clock for every quest – but with the beast itself, as it charges through areas in an attempt to shake you off.

Chasing monsters is an involved sport. Between bursts of violent actions your prey may attempt to claw its way up a sheer rock face, lead you on a spelunking trip through a cave network, or even burrow underground. Your pursuit is built up not only of sprinting, but fun little asides such as swinging from hanging vines, scrabbling through great tree roots, and diving from cliffs (the lattermost can be used tactically to land on the back of a beast and rodeo it around.) And, in oddly endearing moments, teams of friendly Palico cats – cute little tabbys dressed in adventuring gear – can ambush the monster and tie it down, allowing you to unleash a flurry of uninterrupted blows.

Talking of traps, you can place your own, accessed from an overly-fiddly ‘quick’ inventory, and these work most effectively when deployed as part of a co-op strategy. The game is at its best when you work as a hunting party rather than a lone wolf, with each player being able to fulfil a different combat approach thanks to the diversity of weapons. Ranged gear, such as the Flame Blitz gun with its countless special ammunition types, are exceptionally simple to use and offer a wholly different combat experience, but feel notably like a support weapon. While of no use to the solo hunter, such tools have a place among a wider team. 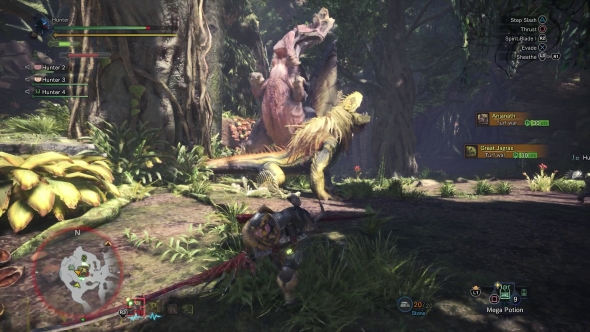 Fighting as a team also feels more cinematic. Not that the game can’t provide that filmic sense of grandeur elsewhere: the stiff moment-to-moment combat may not have the flair of a Hollywood blockbuster, but there are emergent events that bring to mind the best kaiju movies. As my team lays into the aforementioned Barroth rock beast, a colossal khaki-coloured Diablo wyvern bursts from beneath the sand dunes and buries its horns into the side of our target. The two brawl in cataclysmic fashion before the Diablo shatters the ground beneath them, dragging the Barroth into an underground chamber to continue the slaughter. My team peers into the hole, surveying the duel that is now continuing 60 feet below us, before diving in ourselves for a piece of the action.

Monster Hunter is a divisive series, and having finally played some of World I can see exactly why. There are facets of its design that repel me, despite its inherently cool premise. But no matter how frustrated I become with Monster Hunter: World’s Japanese qualites – the complicated HUD, the awkward combat, the complete opaqueness of all its systems – there is always something worth persevering for. Sometimes that is a specific moment, such as a beautiful vista or a successful sword swing that brings a monster to its knees. Mostly, though, it is the feeling that Monster Hunter: World invokes in you. I can’t deny that the thrill of the hunt is real, and it has dug its claws into me.