Monster Hunter World: Iceborne’s Safi’Jiva raid has finally arrived on PC and players from around the world have been working together in order to put an end to the terrifying tyrant’s reign. Safi’Jiva is the latest monolithic monster to join Capcom’s ever-growing roster of toothy terrors and boy does this winged beast pack a punch.

This bloodthirsty Elder Dragon isn’t just gigantic in size, it’s capable of unleashing colossal attacks that can quickly cart even the most experienced of hunters. Safi’Jiva uses its colossal claws and tail to effortlessly sweep players off their feet, while also unleashing deadly AoE effects and energy beams that melt through those that get in the way.

It’s certainly not an easy fight and you’ll need to come prepared if you wish to slay this behemoth. Fortunately, our handy guide aims to supply you with all the tips you need to take down Safi’Jiva and obtain those rare weapon drops. Oh, and check out our list of the best MHW armor sets for Iceborne if you need to grind for some good gear beforehand. 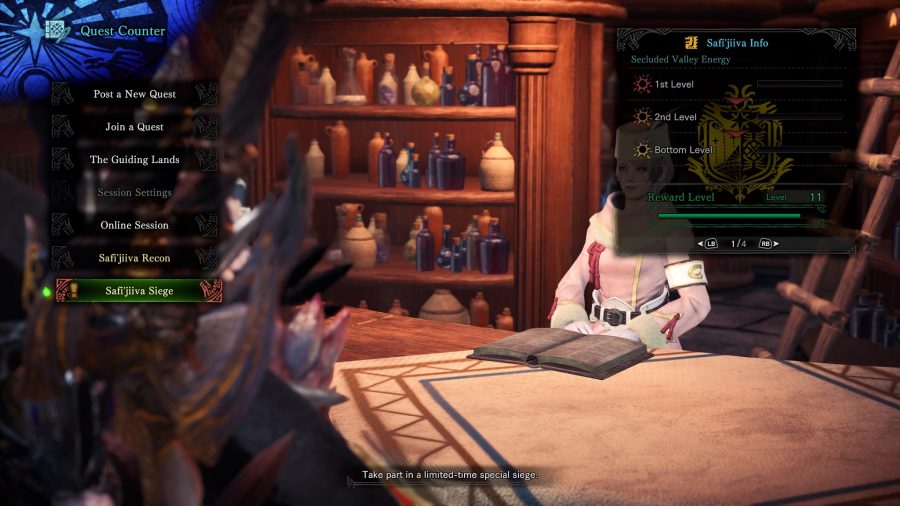 How does the Safi’Jiva Siege work?

Unlike other quests in Iceborne, special siege events allow every hunter in your multiplayer session to contribute towards the quest. This means that every hunting party who takes on Safi’Jiva in the same lobby will increase the siege’s overall level.

The level of the siege will gradually increase when any hunting party successfully manages to break Safi’Jiva’s body parts and forces her to absorb energy from the ground. As a result, it’s imperative that you gem in the Partbreaker skill as this will make it easier to break and sever parts of Safi’Jiva’s body. Achieving successful part breaks will ensure you get the maximum amount of rewards from the siege when it ends. Simply join a lobby that has plenty of hunters in it and keep fighting until you finally manage to slay the toothy terror. 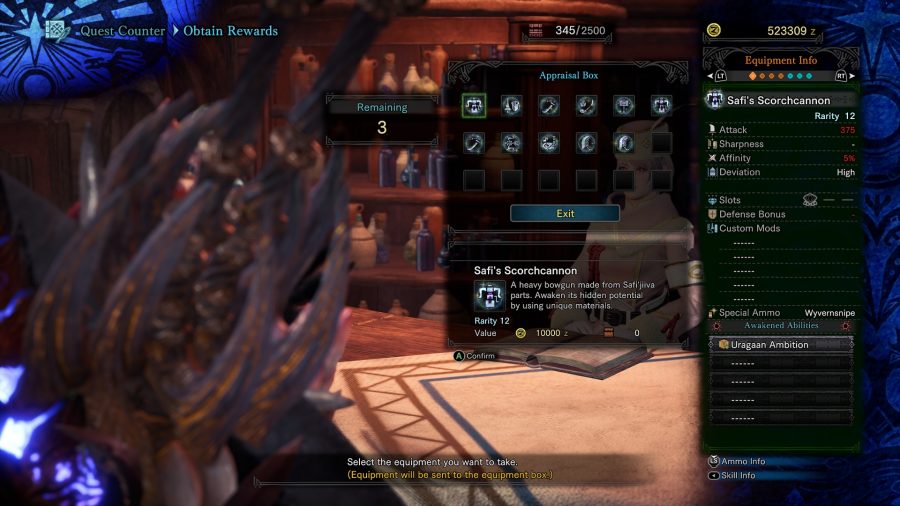 The weapons you receive from the end of the siege will largely depend on how well you did in the hunt, while one of these weapon drops will be influenced by the weapon you have equipped when you report the siege results. For example, reporting the siege results with a Greatsword equipped will ensure one of your rewards will match this same weapon type. It’s important to remember this feature if you’re after a specific weapon from the Safi’Jiva tree.

You’ll only be able to choose three weapons from the loot pool, so having at least one of these drops guaranteed to be the weapon type you’re after is a huge timesaver. Every weapon you receive will have the same base attack, sharpness, and affinity, but the element of each weapon can be different. 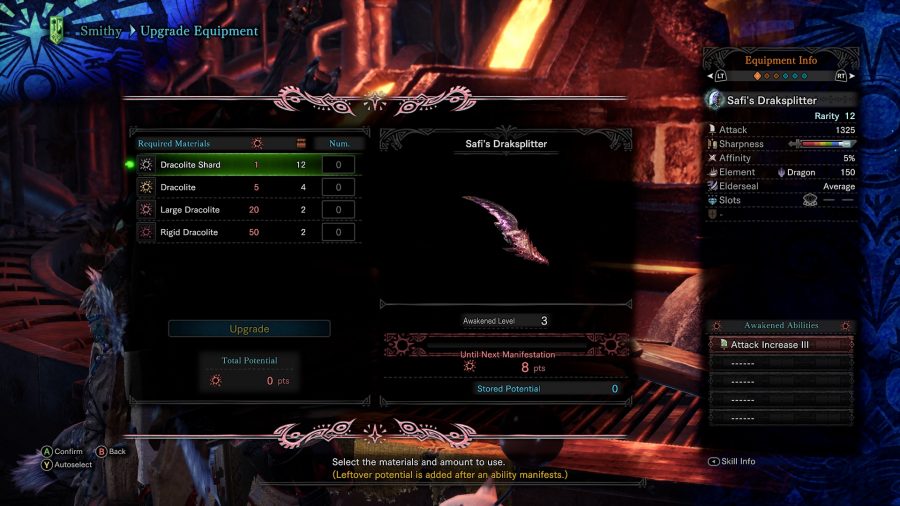 How to upgrade Safi’Jiva weapons?

Once you’ve obtained a collection of weapon types that you wish to use, you’ll want to begin leveling them up to unlock their full potential. To do this, simply head over to the smithy and click on the upgrade tab to begin bolstering your chosen weapon’s stats. It’s during this process that you’ll make use of the Dracolite that you received from completing previous Safi’Jiva hunts, so make sure you are all stocked up on this resource. Each new level will present you with a number of awakened abilities that you can choose from. These range from increased affinity, attack, defense, different phials, and bowgun attachments.

You can even store the potential of a weapon should you wish to reroll the current skills for a chance of obtaining even better awakened abilities. Each ability comes in different rarities (up to five stars) and can be stacked multiple times, greatly increasing your weapon’s overall DPS or defensive capabilities. Additionally, some skills offer enhanced versions (shown by glistening red/orange stars), but only one of these skills can be equipped at a given time. 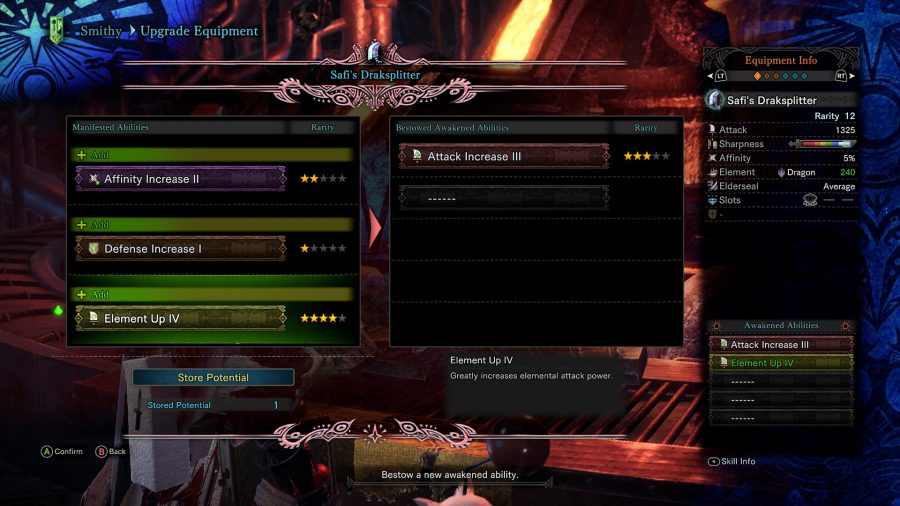 If that wasn’t enough, you can also increase your chances of obtaining better awakened abilities by using your Safi’Jiva weapons in the Safi siege itself. The awakened potential of your weapon is shown in the post-quest screen, giving you another leveling option if you happen to be running low on Dracolite or simply wish to increase the weapon’s level as fast as possible. Every Safi’Jiva weapon has a lot of options to choose from and there are numerous play styles you can spec into, so don’t be afraid to get creative when forging your desired weapon. 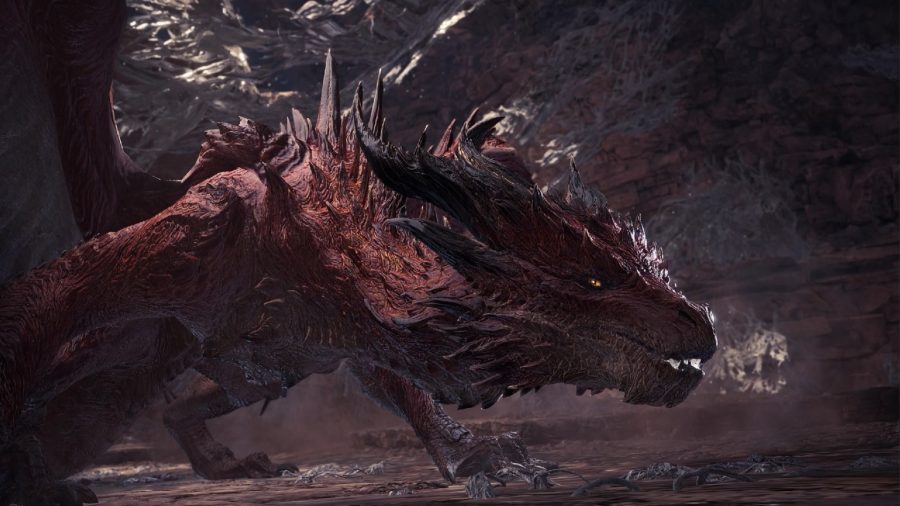 Despite Safi’Jiva’s overall size and gigantic health pool, it does have a few weaknesses that you can capitalise on. Firstly, consider bringing a weapon that either deals dragon, poison, or blast as Safi’Jiva takes increased damage from these, especially when targeting its head and front legs. Obviously, attacking these areas can be a little tricky, particularly when Safi’Jiva is constantly swiping at you with its claws and chomping on those that fail to dodge its lunging bite.

While these basic attacks lack the power of its highly-damaging energy moves, they can prevent you from breaking key body parts. Fortunately, there are a few environmental hazards that you can use to deplete Safi’Jiva’s energy. The first one is located in the southern side of the arena (near the cliff) and once activated, it will trap the Elder Dragon in vines for a few precious seconds, giving you time to focus on those all-important claws, head, wings, and tail breaks.

Consider using an explosive gunner set to help to bring this monolithic beast down to size with lethal KOs.

Meanwhile, the northern side of the map features two boulders that can be dropped onto Safi’Jiva with a well-timed slinger shot. These boulders deal a significant amount of damage and will greatly help to cut down your quest times. Another important feature of this fight is the ability to draw Safi’Jiva’s attention towards a specific hunter. You can obtain Safi’Jiva’s ire by simply dealing the most damage or by firing a flinch shot at its head. Once you’ve aggroed this monster, be sure to constantly barrage it with attacks. If you fail to keep its interest, Safi’Jiva will enter an enraged state where its attacks will become increasingly aggressive and deal more damage. 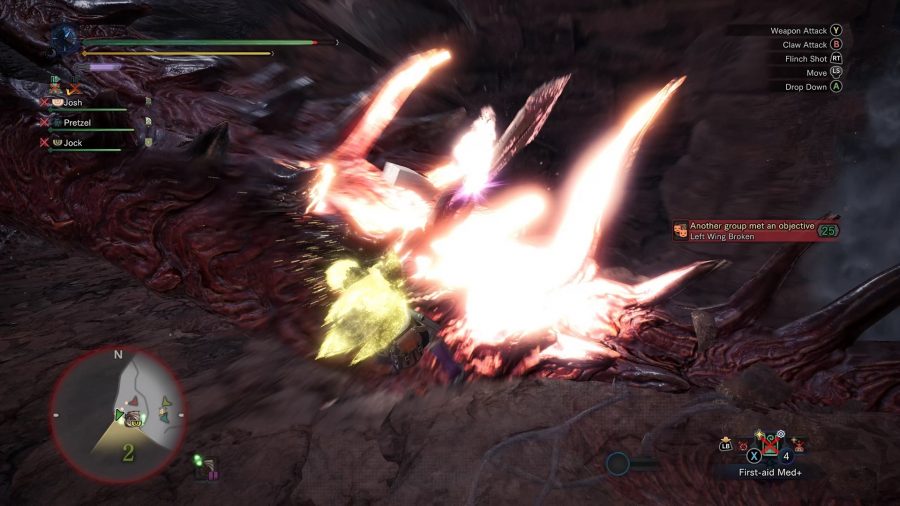 When a player has successfully drawn Safi’Jiva’s attention, you’ll want to constantly soften its body parts with your Clutch Claw and methodically break its head, chest, back, legs, tail, and wings to increase your rewards. This is obviously easier said than done, but with the Partbreaker skill and a decent team you should be able to effectively break each body part in no time. Unlike most conventional monsters in Iceborne, each of Safi’Jiva’s limbs are weak to a wide variety of weapon types. The breakdown is as follows:

Once you’ve successfully broken as many parts as possible and forced Safi’Jiva to absorb more energy, it will move onto a different area. During the next few phases of the fight Safi’Jiva will unleash more energy-based moves, while also taking increased damage from all your attacks.

Make sure you keep well away from Safi’Jiva when it slams its forelegs into the ground as this causes a massive blast of blue energy to explode directly in front of it. If that wasn’t enough, Safi’Jiva will unleash a steady stream of beam attacks from its mouth, annihilating anything that is unfortunate enough to get caught in its way. You can dodge both of these attacks by using the I-frames from the dive or by rolling to the side before each attack hits. If one of your teammates happens to get pinned by Safi’Jiva lunging attack, then be sure to quickly start chugging any Dust of Life you have as this attack absolutely melts through large portions of health no matter how much defence you have. 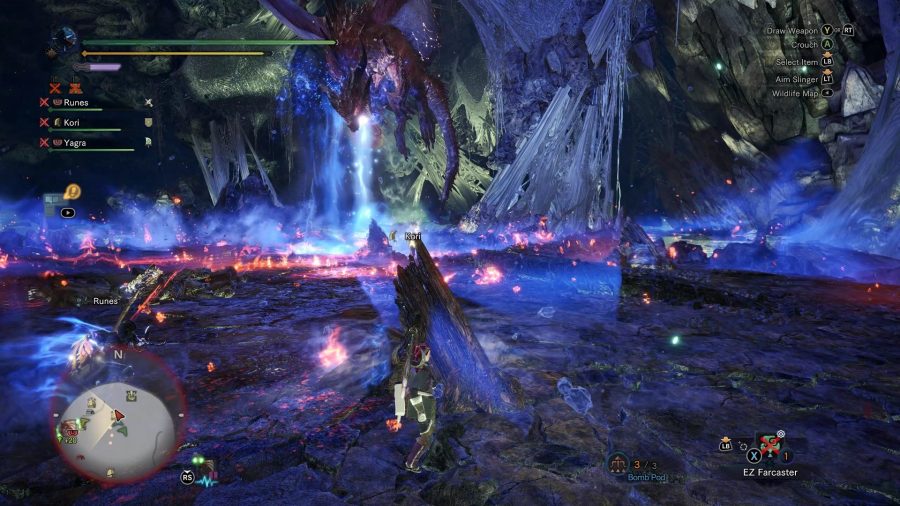 In the final zone, Safi’Jiva’s ordinary claw swipes, bites and tail sweeps will deal even more damage, while certain moves will create deadly pools of fire that burn those that stand atop the scorched earth. The fight is largely the same as the first few stages, so keep on using the Clutch Claw and focus on breaking any parts that remain intact by weaving in your attacks as and when it’s safe to do so. Just remember to always hide behind the nearest rock when Safi’Jiva begins to torch the area with its blue flames as this attack nukes the entire zone, killing all those that fail to find shelter.