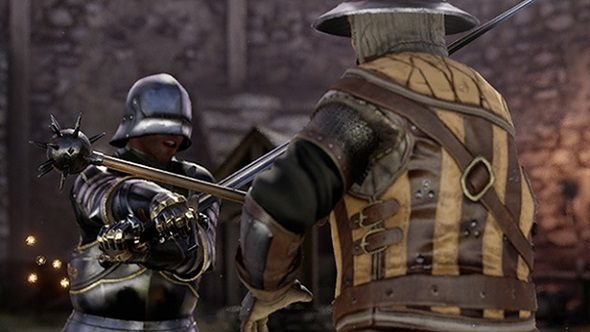 Medieval martial prowess seems to be the ‘in thing’ at the moment, what with the success of For Honor’s time bending multiplayer combat. Capitalising on the current popularity of swordfighting and siegecraft, developer Triternion has launched its Kickstarter for its medieval multiplayer brawler, Mordhau. At time of writing, Mordhau has already blown past its initial funding goal of $80,000 and is currently marching on the $120,000 mark.

Named after a form of German swordsmanship where knights would hold their weapon by the blade and use the pommel to attack, Mordhau boasts a new combat system where players can “cut and thrust from a total of 240 different angles by flicking their mouse in the desired direction.” The developers at Triternion are trying to strike a balance between realism and fun with this new system, where duelling knights have to precisely parry incoming strikes to survive a melee.

It’s not just duels in Mordhau, with Triternion promising siege warfare, alongside mounted combat and ranged weapons in the full game. Crossbows and bows will feature, but you can also just chuck your broadsword and embed it in someone’s head. You can also unscrew your sword’s pommel and “end him rightly”, as an infamous duelling treatise once wrote.

Maps are also promised to react to the battle at hands, so chunks of castle will crumble when hit with a catapult and you can impale poor sellswords with a falling portcullis. Mordhau is set to have dedicated servers to handle its 64 player battles, as well as extensive PC options for those who want to tweak their settings down to the nth degree. Triternion are also promising that the game will never be in early access, with its scheduled launch in March 2018 being the full package. There will be post-release content and updates, so don’t worry about continuous support.

With the Kickstarter closing in on the first stretch goal of $120,000, feel free to give it a look if you’re interested in medieval warfare.