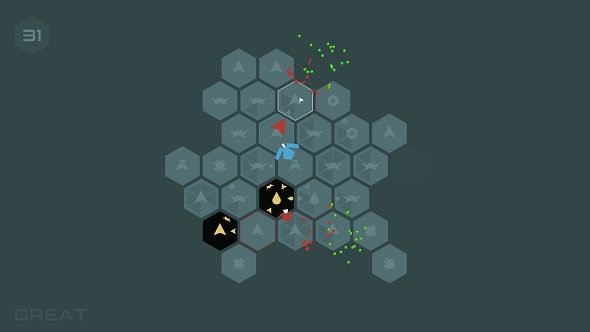 Created as a side project during the ongoing development of Heat Signature, Tom Francis of Suspicious Developments has just released hex based puzzle game Morphblade. Tasking you as a small white robot, it’s the player’s goal to gradually expand a defensive grid, setting up tile combos in order to destroy each oncoming wave of bugs.

For more games from the little guys, check out these other top PC indie games.

Each hex transforms the robot into a different shape, with each shape having its own unique properties. The Blade hex for example, attacks bugs on both sides of the player as they move, while the Arrow hex has players plunge straight through an enemy to appear on the other side. There are six hex types in all, ranging from attacking ones like the Blade and the Arrow to utility tiles like the Repair and Teleport hex.

Killing bugs gradually upgrades the hex that they are located on, eventually allowing players to combine adjacent hexes together to create a super powered tile. If you combine two Arrow hexes together, you get infinite range on your plunging attack, while a Repair hex combined with a Hammer hex will heal your robot whenever you kill a bug. Strategically building out your grid and choosing the right hexes to combine is key for surviving the more hectic waves.

These upgrades can also be stacked, meaning you could create one super hex which strips enemies of armour, heals you, attacks all bugs on the surrounding tiles and teleports you out of danger. You have to really plan ahead when it comes to surviving in Morphblade, so find a certain hex you want to upgrade and try to making it super powered.

While its initial hook and art style are very simple, Morphblade quickly builds into an addicting puzzler which has players thinking about four steps ahead in order to create the perfect grid. It is available on Steam right now for only $4.99/£3.99, with it also coming as part of this month’s Humble Bundle.