Mothergunship is a rush of unconnected words mashed together. Mother? Gun? Ship? The game this word sandwich belongs to follows suit by smashing genres together with a similar reckless abandon. It sees the bullet hell shooter and FPS combine in an unholy hybrid that actually works rather well. Lead developer Joe Mirabello proved that when he made Tower of Guns, an experiment that he expected to sell a couple of thousand copies; in fact, it was played by a couple of million.

Mothergunship is the more ambitious, more polished follow-up, assembled alongside the team that ported Tower of Guns to consoles, Grip Digital. It’s a bold melding of strange design and quietly clever technology – ideas you’d never guess at unless they were pointed out to you. 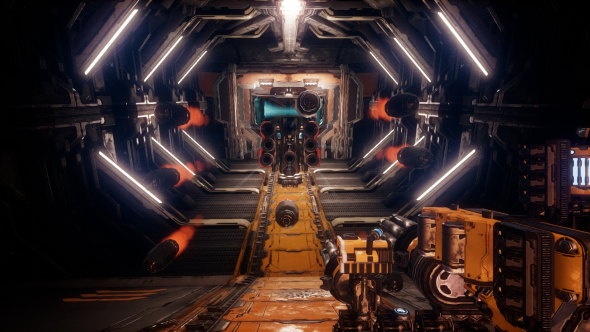 To make the screen-filling stress of the top-down bullet hell genre work in a first-person perspective, Terrible Posture Games and Grip Digital have had to face down some of the same issues the Mirror’s Edge team must have encountered.

“It’s very similar to the problems you face bringing platforming to first-person,” Mirabello explains. “It’s not always the smoothest of combinations, but if you manage to make it so that the player is forgiven from making mistakes, it can be totally doable.”

So the Mothergunship team have learned how to be forgiving through the medium of videogames. Firstly, they programmed their bullets to move fairly slowly. They might let fly in their thousands, but at a moderate pace, the overwhelming odds become manageable. Secondly, they built a movement system that allows you to move vertically with ease.

“You don’t want the player to just be strafing left to right,” Mirabello says. “You want them to feel like they can strafe up.”

So say goodbye to realistic jumps. In Mothergunship, you can chain three hops from the off – and potentially hundreds by the end of the game. What’s more, its levels are filled with plenty of boosts, jump pads, and other silly ways to get you airborne. Suddenly, you have a lot more options when trying to escape from hairy situations.

The third trick, and the strangest one, is that not all of the bullets in Mothergunship are headed straight for you. In fact, the majority are programmed to harry but not necessarily hit – “a support crew along for the ride.”

“It sounds really weird, but if you don’t aim at the player you create what feels like walls of bullets,” Mirabello expands. “Those walls add to the stress factor. If you think about it, in a top-down bullet hell game, that’s the case – they don’t actually aim at you. It creates a lateral pattern that you can negotiate by jumping around.”

The bullets you don’t see 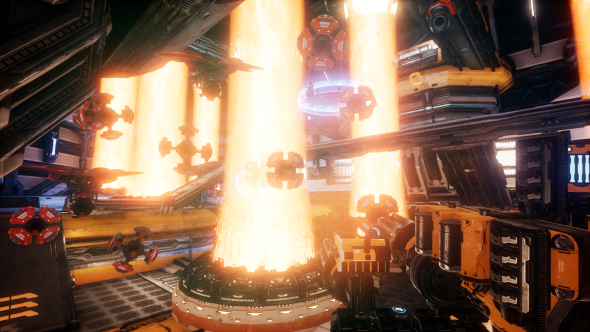 In a traditional bullet hell game – like Ikaruga, the Dante’s Inferno of the genre – you’re given all the visual information about the battlefield there is. From your perspective on high, planning and reacting are as easy as glancing at the screen. In first-person, by comparison, you’re shut off – granted just a small window into what’s going on.

“You have to give the player a lot of tells about when things are coming into close proximity,” Mirabello says. “You don’t have situational awareness that is perfect.”

Mothergunship employs a variety of cues to help. 3D sound and the UI act in tandem as a warning system for what’s going on behind you. And, crucially, the game gives you plenty of health so you can afford to take a few hits – enough to give you an idea of where you’re being shot from.

Really, this is how we’ve been trained to think in first-person. How often have you only noticed an FPS enemy because they’ve peppered you with machine gun fire, flagged up by a bright red directional indicator?

“If you have more health, you can use that health to gather information while you’re playing,” Mirabello concludes. 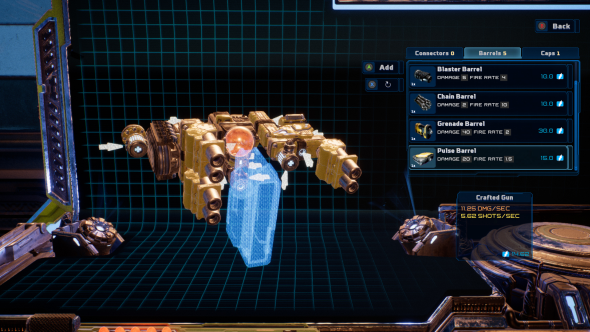 One of Mothergunship’s key draws is its modular weapon crafting system. They’re a frightening thing to build, apparently: a way of developers handing over an uncomfortable amount of control to players.

“This is something I’ve had to get my team to rally around,” Mirabello says. “You, as a designer, have to be ok with not having authority over what the player experiences. When you create any kind of modular system like that you’re creating a sandbox.”

It’s not so tricky when it’s a matter of scopes, silencers, and stocks – but Mothergunship’s upgrades are more absurd. We’re talking flamethrowers, strapped onto rockets, perched atop chainguns.

“We’re treating this game more like a first-person Contra,” Mirabello explains, “and making the player feel empowered to do whatever they want with that system was the heart of it.”

The performance issues that come with a ten-barrel weapon that belches fire are, as you might imagine, not insignificant.

“You have to do a few clever things behind the scenes,” Mirabello says. “We’re going to be working on that from now until [we] ship.” 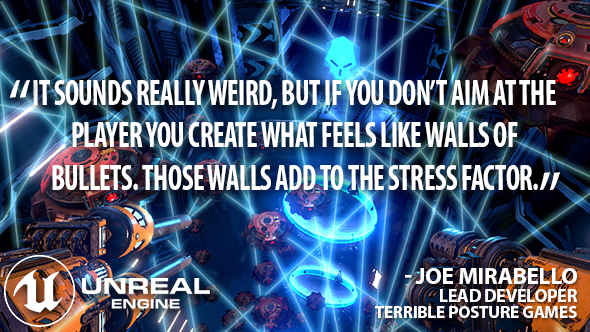 A ‘pooling’ system keeps a cap on the amount of stuff that can spawn into the game world at once. Guns have their own pool of allotted memory, for instance, as do enemy bullets, and the loot that shows up in Mothergunship’s levels.

“Those different pools are allowed to be used, tapped into, and recycled so it’s constantly performant,” Mirabello explains.

Elsewhere, the developers have relied on LODs (Level of Details). They’re ordinarily used to reduce detail on objects as you move further away from them, in the name of improving performance. Here, they handle the gunfire and flames.

“If you know the player’s spawning a ton of different particle effects, than maybe all of them don’t need to be at the highest quality level, because there’s so much going on,” Mirabello says. “Maybe they can all drop a level. It’s little tricks like that.”

It’s those little tricks that are enable Mothergunship to go big. After decades spent watching the genre from above, its team are embracing a modern vision of bullet hell which is, quite literally, in your face.

Mothergunship is headed to Steam. Unreal Engine 4 is now free.

In this sponsored series, we’re looking at how game developers are taking advantage of Unreal Engine 4 to create a new generation of PC games. With thanks to Epic Games, Terrible Posture Games, and Grip Digital.