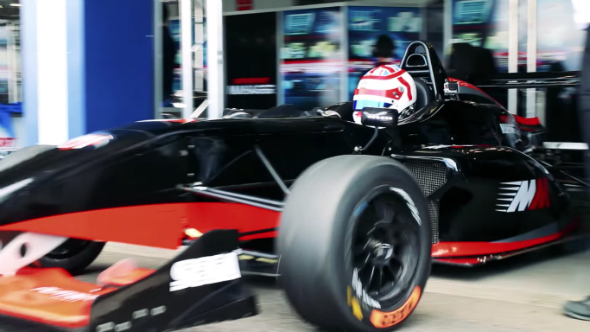 Very often we’re stabbing in the dark when it comes to realism in games. What does a rocket launcher really feel like when you pull the trigger? Do F1 cars behave like the polygonal abstractions we control with our pads and wheels? Does a real Cacodemon gush with quite as much viscera? It’s anyone’s guess. However after a recent outing to Bedford Autodrome, we’ve at least got some idea of what it’s like to manage a racing team.

As you’ll see in the video above, the event Phil and Bodders attended gave them the chance to decide from a range of possible updates to an open-wheeler, bid on a racing driver to actually drive it, and attempt to put together a superior package to an opposing team doing the very same.

After electing for power and exhaust upgrades over soft tyres and better brakes, we opted for the cheaper, more inexperienced driver on offer. Well, it’s all about the cars these days anyway, right?

We thought the cash we saved on a driver would bulid a race car vastly superior to our opponents – but how did it play out in the race? All’s revealed in the vid.

And the all-important question: how does Motorsport Manager shape up to (a fairly loose abstraction of) the real thing? Well, we’re a lot better at the videogame, for one thing. Definitely more enjoyable calling the shots from the comfort of your desk than nervously peering out at the track from a windy, freezing pitwall.

Nothing quite matches the smell of petrol and rubber though, does it? So it’s all about compromise, is what we learned.

If you enjoyed the vid, head over and subscribe to PCGamesN on YouTube to never miss an update.