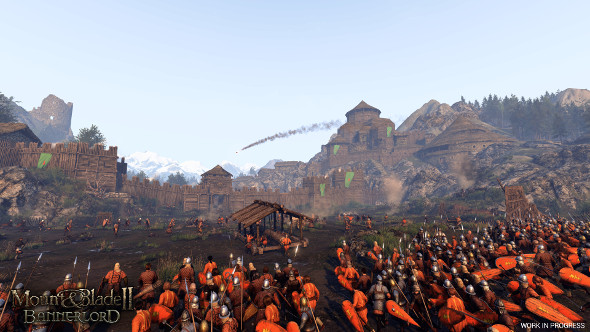 Mount & Blade II: Bannerlord’s lead designer, Armagan Yavuz, has told us a little more about the game’s multiplayer features. Captain’s mode, which was announced last week, is apparently the first of four planned modes that will be added before release.

Yavuz says that the aim of Captain’s mode is to attempt to “recreate the atmosphere of medieval battles.” Players will take their own army into battle, but while there, they’ll control one of six classes; two infantry, two archer, two cavalry. While directing your AI forces around the battlefield, you’ll also control your own character in an attempt to make the game “teamwork-oriented.”

Yavuz also says that Captain’s mode is just one of “at least” four multiplayer modes that are planned for the game. One of these, a siege mode, was touched on last week, but there will also be Duel, and a multiplayer mode “without bots,” and Captain’s Mode.

There will also probably be a multiplayer beta at some point. Yavuz says “Probably at some point we’ll have something like that. Currently, there’s nothing on that for the immediate future.”

Original Story, August 22: Mount & Blade II: Bannerlord is getting Captain Mode, a tactical multiplayer mode featuring small-scale 5v5 battles. You’ll enter the battle with your own army, but depending on your role, you’ll only command all of the cavalry, infantry, or archers.

Developers TaleWorlds showed off the new mode in a demo video uploaded today. You’ll be able to adapt your army, choosing between a few pre-determined unit types, and picking perks that improve their weapons and armour, grant you more units, and provide buffs to stats like morale and agility.

Once the battle starts, you can control your troops, moving them around the battlefield and getting them into formation. It seems as though you’ll be able to order about a dozen units at a time in this way, as you control your own individual character. While the total unit count isn’t huge, the maps are quite big, and that allows for battles that will spread out as they progress, which looks interesting.

Elsewhere in the stream, TaleWorlds discuss some of the rest of Bannerlord’s gameplay. Whether or not there’ll be co-op they won’t say, but it’s “difficult to do it in a way that’s top-quality.” They reference a modding community that can get away with certain aspects of multiplayer creation that they, as developers, can’t.

“Mod support is really important for us,” they say, and add that it’ll be “much more powerful” and accessible than in the first game, with a system where mods will be able to coexist within the game if the mod-makers have utilised that functionality. TaleWorlds haven’t decided whether mod support will be in-game or available through Steam Workshop, though.

As in Warband, you can own shops in Bannerlord, and villagers can build castles, but there isn’t “a system where you can customise a castle.” Castles will be part of the strategic element of the game, where you’ll have to figure out what resources you’ll allocate to your buildings. There’ll be levels of castle, from simple wooden keeps to large stone fortresses, and they’ll be “very important” in siege battles, where you’ll be defending your own bases.

The livestream did not announce the release date for Mount & Blade II: Bannerlord, because, as Taleworlds put it, “it does not exist.”