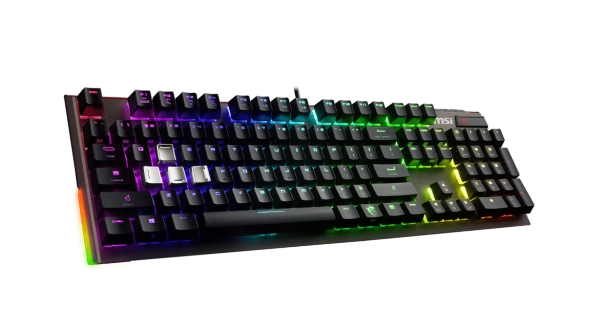 MSI’s Vigor GK80 serves as the flagship for MSI’s gaming keyboard lineup. That is why MSI are targeting the absolute premium in peripherals with this pricey board. However, this eclectic keyboard suffers at the hand of its build quality and design, which obfuscate the high-end components at its foundation.

Want the definitive list of the best gaming keyboards? Look no further.

MSI’s Vigor GK80 features the full range of essential features you might expect from a gaming keyboard. Those are, namely, Cherry MX Red switches, full per-key RGB functionality, various included keycap sets, n-key rollover, USB passthrough, an ergonomic wrist rest, its own setup software, and discrete media controls with some as the secondary function of the F keys.

That list of features could be applied to almost any other high-end keyboard, with the GK80 offering very little else to sway consumers. If anything, it actually falls behind the competition in overall build quality. At $149/ £160, the GK80 doesn’t come cheap, either.

The most notable letdown is the keycaps. They are a complete mess, the finish is dreadful, and they’re busier than the Hartsfield-Jackson Atlanta International Airport. The keycaps feature a typeface that is incredibly inconsistent – case and point: the pound sign looks like it was taken from an entirely generic font family rather than one created bespoke for the board. The keys also feature nondescript icons for settings that most users will either opt to change in the Mystic Light app or are otherwise locked behind proprietary apps for MSI graphics cards. 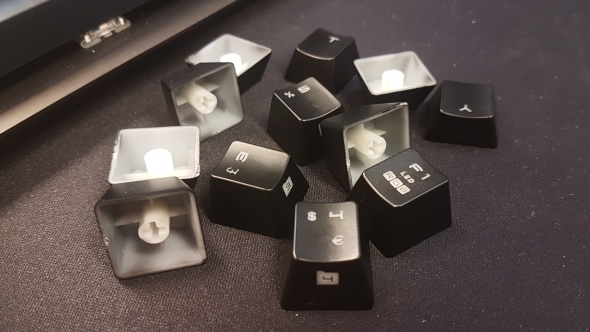 Unfortunately, what is included in the box with the GK80 doesn’t inspire the greatest confidence in the quality standard adhered to during the manufacturing process. Almost every keycap on our board features visual impurities, either in the finish or where they’ve been separated from the mould.

Also, one of the keycaps included within the box doesn’t seem to fit anywhere on the keyboard itself. This elongated key – which I believe is designed for the return key on an ANSI layout keyboard – is slightly too long for the backspace, return, and + keys on ISO boards, but will make for a delightful space bar at a third of the standard size. 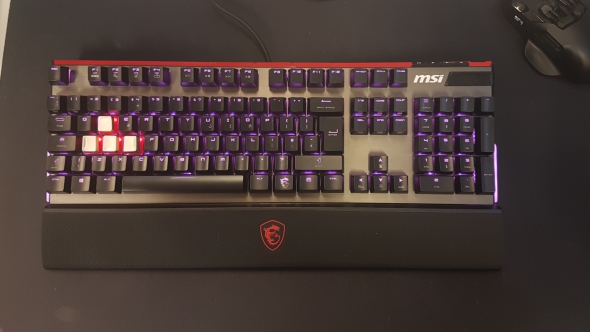 For the flurry of lighting that MSI have insisted on this board – from the per-key RGB lighting to the light bars running parallel on either side – the caps lock and num lock indicators are visually bereft under a thick layer of semi-translucent plastic.

Unfortunately, the same lack of detail carries over to the included wrist rest. The considerable bulk of this metal slab is enough to keep it somewhat in place, but features no mechanism or magnet to physically attach it to the board. It’s also rather unfinished, with both ends of the wrist rest devoid of any end piece or cap aside from a small removable rubber grommet that covers very little of the opening. I’ll give MSI the benefit of the doubt and assume this is for cable management and not just a happy accident… maybe. 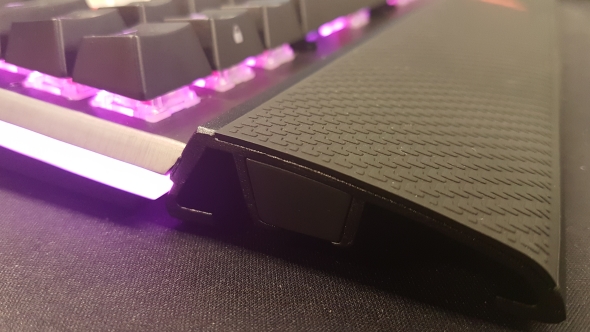 The core of the GK80 isn’t, in itself, dreadful. The Cherry switches are responsive and if you like a linear switch you’ll find few better in the gaming space. All the usual RGB bells and whistles are there too, but it’s a shame that they are being hidden behind those keycaps and the trifling Mystic Light software. N-key rollover has become a somewhat unnecessary standard for almost everyone, but it is a sign that the function of this keyboard is up-to-par with the competition.

If you swap the keycaps and the wrist rest for some that are a little less guache, then the end result would be a really great-looking board that has the switches to match. Unfortunately, you cannot rest on your mechanical switched laurels and we aren’t at a loss for keyboards in the market that offer everything and more straight out of the box. Which all leaves the Vigor GK80 overpriced, underwhelming, and unable to compete.