The MSI MEG X570 Godlike is leading the charge for AMD’s X570 chipset. There are few Ryzen 3000 compatible motherboards that can hold a candle to MSI’s finest AM4 in either capability or price. But when the glossy sheen of the infinite mirrored RGB wears off and you’ve stopped gawking at your PC through its tempered glass side panel all hours of the day, can anyone, even the most liberally loaded amongst us, really say this board is necessary?

From the MEG X570 Godlike’s specs list to its over-the-top styling, this motherboard is extreme. It comes with an 18-phase VRM (14+4); 1Gb, 2.5Gb, and 10Gb connectivity in the box; and enough system fan headers to blow a wind surfer out to sea. No box is left unchecked. Every inch of the MEG X570 Godlike’s eATX PCB veiled in electronics from premium audio codecs to built-in OLED panels depicting dragons beating up ninjas with the words ‘good job’ scrawled across it. Seriously.

But the same could be said for its price tag, too. At $700 (£744) – originally $777 to remind customers that price is merely a construct of a marketing department – this motherboard is beyond expensive. It’s almost beyond reason, in fact. A motherboard should rarely be more expensive than the CPU you plonk in it, yet here we are with a board initially priced in excess of even the unreleased 16-core Ryzen 9 3950X.

For that cash you get only the best components going. As I briefly mentioned, the VRM is comprised of 18 phases, of which 14, running across Infineon TDA21472 MOSFETs, are dedicated solely to delivering clean energy to your chip’s 7nm silicon. That’s what little overclocking is to be had with Ryzen 3000 sorted then.

The X570 chipset also brings its own ubiquitous goodies to the table: PCIe 4.0 by far the most newsworthy. This is capable of driving double the bandwidth over its predecessor, opening the door to an increase in I/O, storage, and add-in cards. AMD’s Radeon RX 5700-series graphics cards, along with a sole Phison SSD controller, are among the first pieces of hardware to support the new tech.

There are some optional extras included in the box with the MEG X570 Godlike, too. This includes an Aquantia 10GbE LAN adapter, a wi-fi antenna, and the M.2 Xpander-Z Gen4. The latter adding two extra PCIe 4.0 capable M.2 slots for a grand total of five.

We found the Corsair Force MP600 agreeable to the excess bandwidth available via the connection, managing to break the 4GB/s barrier in sequential read and getting awfully close in sequential write. However, this SSD doesn’t break the PCIe 3.0 theoretical limit by a great deal, and performs close to its maximum potential in AS SSD even on 400-series boards sans PCIe 4.0 bandwidth.

And it wasn’t until the rear I/O panel that I found myself in any way disappointed with the MEG X570 Godlike. Don’t worry, it’s nothing to do with the 6.3mm stereo headphone out. That’s grand if you don’t fancy an external DAC. Rather it’s the USB ports – or lack thereof – that has me baffled. The Godlike has just six USB ports, all of varying USB 3.2 variety, with a single Type-C. MSI has deemed only the Prestige X570 Creation fit for a litany of USB ports, likely much to the ire of many a streamer. Even the MSI MEG X570 Ace is better equipped. 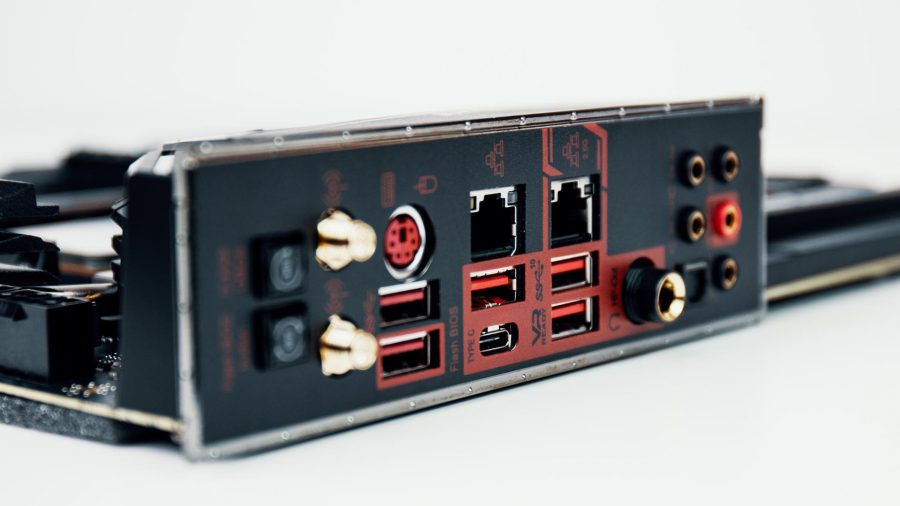 Yet if the Godlike is not for professionals and creators, then who? How many enthusiasts are so loose with the purse strings that $700 (£744) is worth it for a handful of features not found on MSI’s far cheaper MEG X570 Ace? Not to mention the complete lack of USB connectivity.

I’d be foolish to think that no gamer is interested in this monster motherboard – it’s a fantastic bit of kit in a litany of ways and money is no object to the 1%. Yet it feels like the Godlike is built to appeal to those of us with that ‘just in case’ mentality – every PC gamer gets it at some point. And while cub scouts taught me to always be prepared, with Zen 2 taking poorly to overclocking and an I/O devoid of USB ports, it feels like money spent on the MSI MEG X570 Godlike could’ve been put to better use elsewhere.

While an impressive spectacle, the MSI MEG X570 Godlike is bereft of USB ports and, due to its engorged price tag, any concept of value.