MSI has shown off the final version of its Optix MPG341CQR gaming monitor at Computex 2019, which will be launching sometime in the next few months. The 34-inch monitor is equipped with an ultrawide 3440×1440, 144Hz panel; HDR 400, and smart functionality to lessen the time spent messing about in the OSD.

MSI is calling its latest panel ‘AI’ although there doesn’t look to be much inference going on. Rather the MPG341CQR is equipped with a handful of smart features to enhance the usual specs sheet and, along with some hardware augmentations, help MSI’s latest panel stand out from the crowd.

Still, whether technically AI or not, the new smart functionality could prove handy for gamers on shared PCs. The main draw is the screen’s facial recognition software that will actively switch between user profiles depending on who’s sitting in front of the panel. Each profile stores a user’s individual picture and hardware settings, including RGB profiles, and proved itself to be pretty speedy to respond to a new user during a live demo over at MSI’s Computex booth.

It’s not all 2019 buzzwords with the Optix MPG341CQR, however. MSI has also included a mouse bungee for the underside of the panel and a stand for a webcam up top. Also along the lower bezel MSI has bought back its five RGB lighting zones, which are able to react to in-game hooks… in three games. 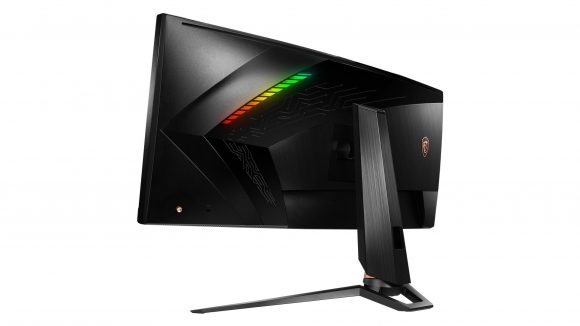 To be fair those three games are some of the biggest in the world – CS:GO, DOTA 2, and Mincecraft – but GameSense compatible could certainly benefit from increasing its supported games to seem at all convincing to a prospective buyer on this £869 monitor.

The Optix MPG341CQR will launch sometime over the next few months – an exact date is yet to be confirmed.

More real estate: These are the best gaming monitors

And while we were out at the booth we also caught sight of the MSI monitor that stopped a bullet a few months back. The screen not only blocked the projectile for one lucky (or unlucky – they still had their house shot up) owner, but it also still works to this day. The user received a new panel from the company regardless, and MSI scooped up the screen for that sweet marketing kudos at the booth.