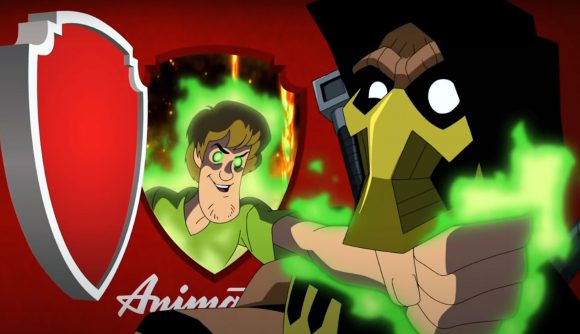 A platform fighting game similar to Nintendo’s Super Smash Bros or this month’s Nickelodeon All-Star Brawl but starring Warner Bros licensed characters is reportedly in the works – which, if true, would include fighters such as Batman, Gandalf, Fred Flintstone, and Shaggy from Scooby-Doo.

According to the original leak on Reddit, the Warner Bros crossover platform fighter is more of a tag-team battler than a traditional Smash Bros-style game but will include properties from multiple Warner Bros properties – including DC Comics, Lord of the Rings, Mad Max, the studio’s multiple cartoons, and possibly even the Harry Potter series.

Supposedly this idea came about after the petition to add Shaggy to Mortal Kombat really took off – which Warner Bros itself referenced in the recent Mortal Kombat: Battle of the Realms cartoon – as well as the popularity of this year’s Space Jam: A New Legacy movie, which was essentially one big Warner Bros crossover. A trademark was even dug up for a possible name: Multiversus.

This rumour was given credence by GamesBeat’s Jeff Grubb, who corroborates the story but denies that it’s being made by NetherRealm – who is supposedly working on Mortal Kombat 12 rather than this or the expected Injustice 3, also according to Grubb.

This WB platform fighter is real, but it is not a Netherrealm game. Come on. https://t.co/WkMiKf4dTH

There’s certainly plenty of characters to choose from in the Warner Bros stables. The game could conceivably bring in characters from The Matrix, Mortal Kombat, and even this month’s Dune movie if the studio wanted.

There are certainly a fair few Smash Bros-style games on PC already, but if more traditional fighting games float your boat, the PC has you covered on that front too.